Your cart
I've got some good news to share about Cris, which, btw, is how he spells his name. It's short for Crispen, a Latin name meaning curly haired, or so I just learned. Unfortunately I never did ask my in laws how they came up with that name for their firstborn. Two things, his first name is Joel, but he goes by Cris, and no, he has anything but curly hair! More importantly, he is improving as he enters his second month of hospitalization. He's eating better and has even sat in a chair which is huge. Today he received both a second dose of Convalescent Plasma, and a new Covid test. Should that come back negative, he most likely will be moved to another unit and here's the real biggie....visitors may be permitted!! Cris and Judy are coming up on their 48th wedding anniversary and the hope is that even before that big date, Judy will be allowed to see him again for the first time since she dropped him off at the emergency room!! Hallelujah!

For us, this week has been much the same except, get this, I've actually gone a few places and they were not Publix or Clemons! Before we delve into those exciting places, when last we met, a storm was heading towards Central Florida. It did not. We were on the pickleball court when it began raining, enough so we all scrambled to our cars, however, once we were all home out of our wet clothes, it stopped and never started again. While I'm glad for that, I am gladder still because the name, Isais was so difficult to pronounce, I was hoping we wouldn't have to use it for more than a day. Sadly it did hit in North Carolina with some damage, but nothing super major.

Yes we played pickleball most mornings and no to any field trips. We had loads of rain in the afternoons, keeping us inside to work on puzzles. Plural because, one of my little afternoon trips was to visit, as it turns out, my fairy Godmother, Ann. We were slated to just do a puzzle swap, but she ended up inviting me in and we had a marvelous visit, socially distanced, of course. 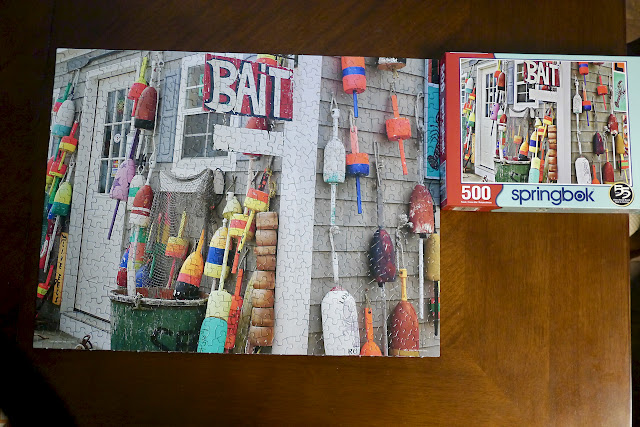 I'd finished this during the alleged storm and was having withdrawals, so I got in touch with Ann. Before I go further, this puzzle, while a neat image was interesting in that there was less puzzle than the image portrayed. I know weird, but once that frame was done, it was pretty darn fun. While doing the frame, I kept looking for more of that lobster on the right to no avail. Puzzled, I looked at some online reviews where I was alerted to this problem. Now when I loan it out I will pass that along. I left her place with not one, but two fantastic puzzles, two novels and a small bottle of some homemade Limoncello which is in the freezer as I type. She began the process near the beginning of the time of Corona, probably never imagining that it would still be raging on after the something like the 80 days of fermentation. Gosh it was nice to see her.

Early on I wrote a post about all of the new language associated with this unprecedented time and over time more phrases or words have emerged that are new to me. Have you heard the term "security theater"? It means safety measures that are done somewhat for show. Then there is "cancel culture", "Karen", and "woke". Some enlightened readers may have already known these terms, but they are new to me. I would be lying if I told you that any of them are very appealing to me, especially Karen as I know plenty of Karens that are good people.

Because of all the rain the quilt has been back in the picture. Friends, I am nearing the finish line on the top and the time that it has taken me is nothing to be proud of, that's for sure. Having, once again, used up all of my cut fabric, I just could not face using more of the same so.......I took a trip to Hobby Lobby for something different. Their supplies were diminished and the woman who cut my fabric told me that not only are they not having their usual sales but they can't keep enough fabric or elastic in stock. Apparently mask making is still going on. 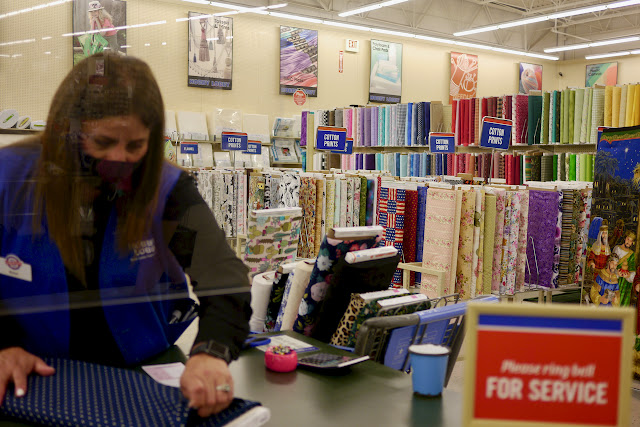 The new fabric was cut, more couples were put together, 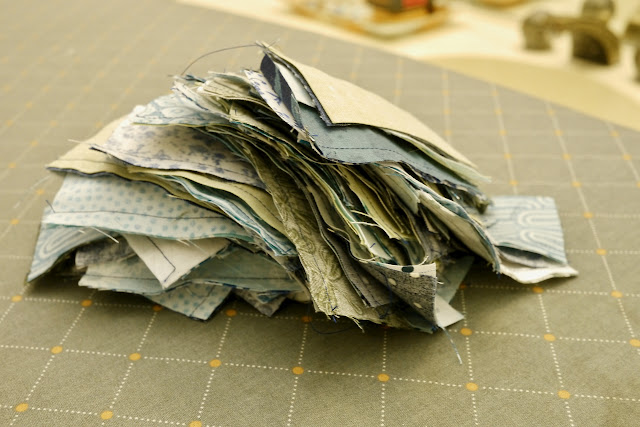 and it still wasn't enough!! I have 34 more duos to put together and then they all get put together and then the rows which I'm hoping will all blend in and the new stuff won't show up like a sore thumb! Whew, sorry for that run on sentence! Seriously, it is going to be so busy, it will be a blur. All the while I listened to Lost in Alaska, finally finishing it yesterday afternoon. The bottom line is that even after nine years of digging into this story, the plane has still not been found. For those who listen to NPR, I did learn that it was Cokie Roberts father who went down in the plane. If for no other reason, I suggest you click on that link and see what her real name was. Amazing. I am thinking of sending it out to be quilted because, Lord knows, it is huge and will probably take me more time than I can imagine. Then again, what else do I have right now but time?

Dated 6/23/2020, I finally drove over to the bank to deposit the check my publisher sent me all that time ago. Sadly it was small, but is that any surprise? No, it is not. Yesterday's headline was that Disney lost $2 billion in the last quarter!!! Where, oh where, is all this leading us? What pray tell is the photo below all about? You tell me. Why would make someone take off their sandals in a bank parking lot? It is as if she stepped out of them and got in her car. Perhaps there is a short story in this? 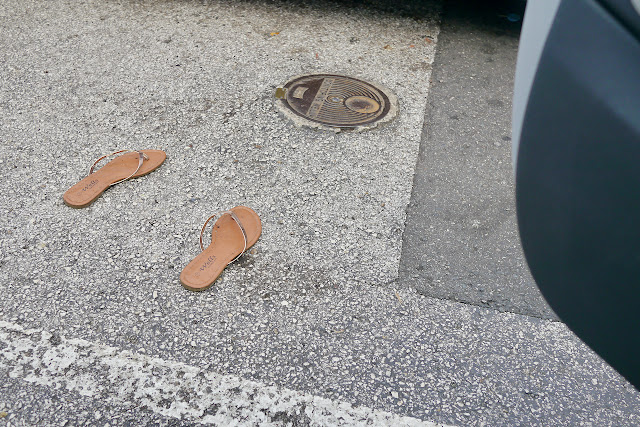 A couple of posts ago, one that most people apparently did not see according to my stats, I showed a Mother Mallard on some eggs in a planter on the pool deck. Well, here's some exciting news. The eggs have hatched! 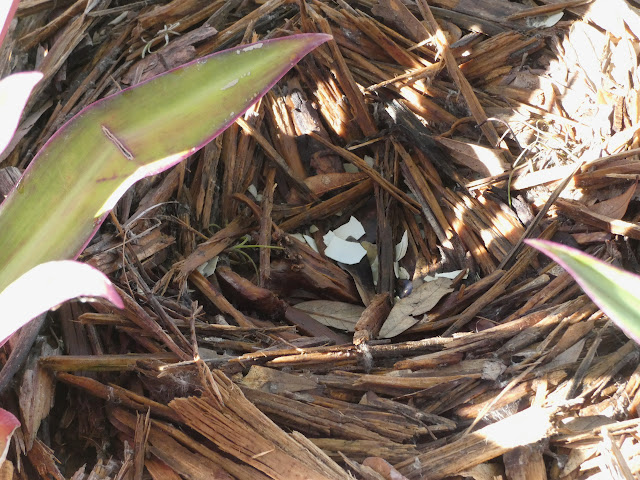 While riding my bike around this morning my friends told me they had seen the new ducklings on their walk, even telling me where they had seen them. Music to my ears friends, music to my ears. The first photos I took were terrible due to poor lighting, however, after an hour of practicing pickleball in the horrible heat, I was bushed so on my ride home I swung by again to see if I could get some better photos. Done and done! They came quite close and while I've got some good ones, this one is super cute because they are very close to shore in very clear water. 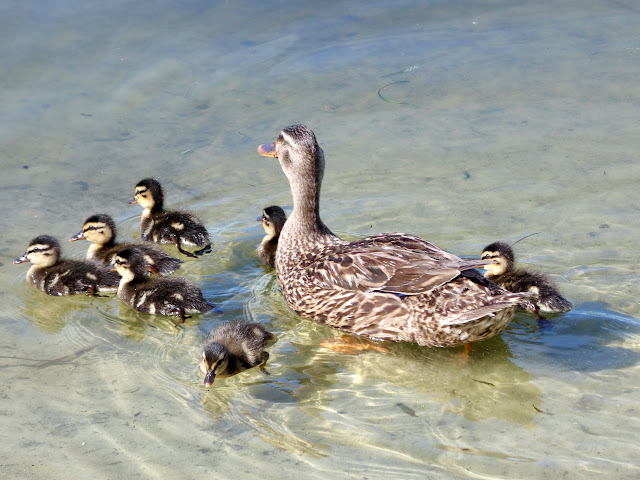 Aren't they just adorable?? From talking to folks, it seems as if they are about four days old. I wish they were on our little lake where there are more hiding places, but time will tell how many survive on the big lake.

I know the very best way to cool off when it is blazing hot....yup, the swimming pool where I swam and began one of the books Ann lent me. It was super great in the shade. 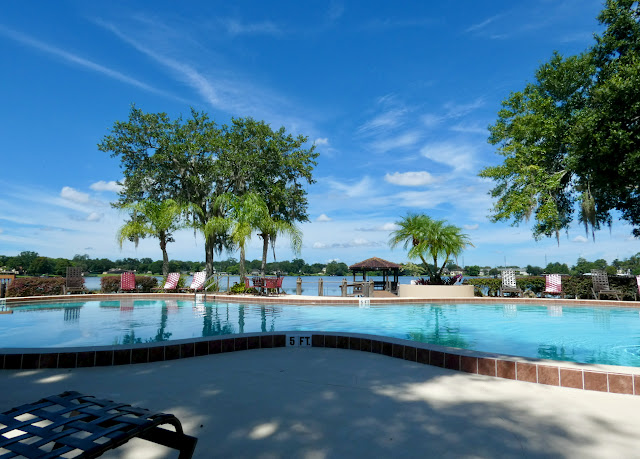 As you can see, there is not a social distancing problem at all. In fact, while I was there, only a handful of people came and went. Thinking about the ducklings, Mama was in the ivory planter on the right side of the dock. We are all mystified as to how the ducklings survived the jump down and then into the lake which is many feet below the pool. Nature is amazing is all I can say. The water lilies are looking lovely, especially when the sky is reflecting so beautifully on the water. 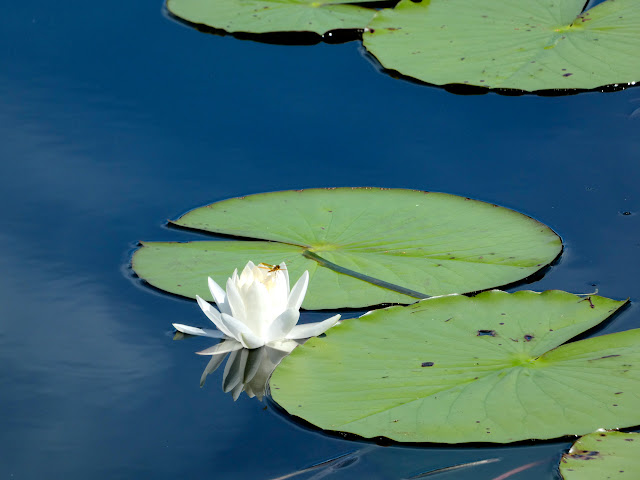 Oh snap...there's a dragonfly on that water lily! While not nearly as impressive as the Victoria water lilies in my last post, they are lovely, nonetheless.

So, there is one short story prompt in this post, and here's another. What printer would not alert the customer to the misspellings on this car I saw parked today? They paid for this sign?

Closely cropped to leave out the phone number, I'm mystified. While on the topic of mysteries, we began watching Breaking Bad and while it was good, the violence was a bit much for us. Ann and I talked about British television mysteries and she recommended one that I could not find on Amazon or Netflix, however I did stumble upon a series that has turned out to be nothing short of excellent, Endeavour. Holy Cow, is is good.

One fascinating thing about living on water is how you notice the movement of the Earth through the sunrise, sunset and moonrise. I love walking into our not yet updated bathroom and seeing the day begin. 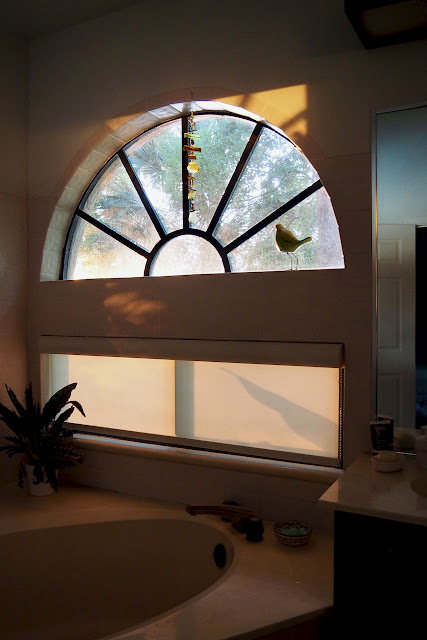 With all of the stormy weather, both the sunrise and sunset are much more dramatic than when the weather is calm. Taken this morning, will the red sky mean anything? So far, not, but the day is not over yet. 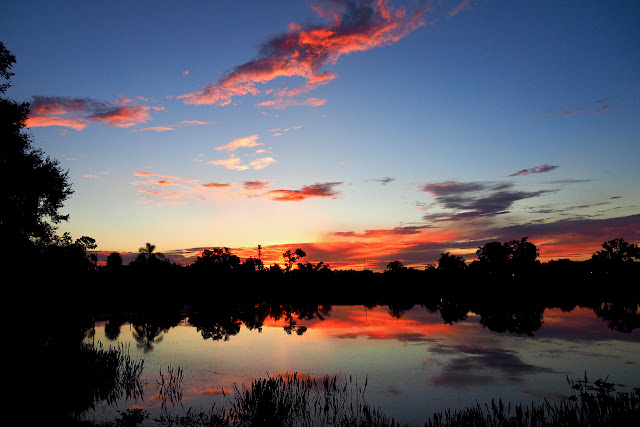 Finally, the once a year blooms on a Giant Schefflera are something to behold. 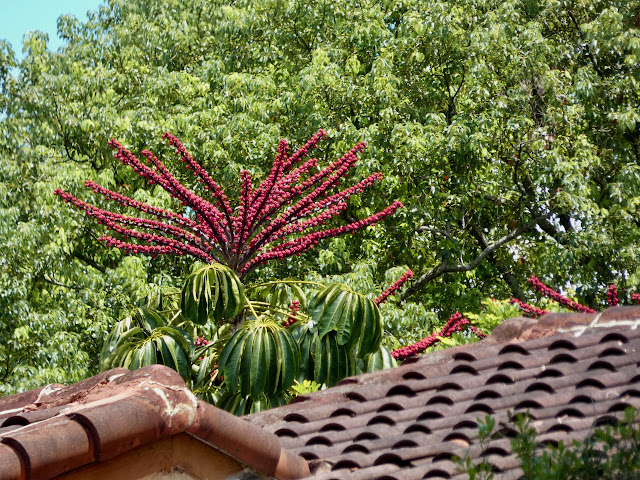 We used to have one of these trees at our home and the yearly show was dramatic,  plus the bees had a heyday with them.

The kitchen is calling dear ones. Stay safe, wear your masks, social distance, and for heaven's sake, love one another because this virus is no joke as Cris's story clearly demonstrates. Don't let petty political differences alter that because you just never know what tomorrow will bring. Heck, Jessica is still not 100% and she's young and healthy!