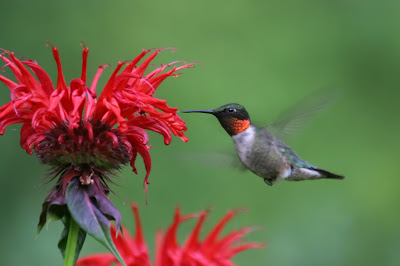 "Free As A Bird"
by Chet Raymo
"All afternoon I have been watching a pair of hummingbirds play about our porch. They live somewhere nearby, though I haven't found their nest. They are attracted to our hummingbird feeder, which we keep full of sugar water. What perfect little machines they are! No other bird can perform their tricks of flight - flying backwards, hovering in place. Zip. Zip. From perch to perch in a blur of iridescence. If you want a symbol of freedom, the hummingbird is it. Exuberant. Unpredictable. A streak of pure fun. It is the speed, of course, that gives the impression of perfect spontaneity. The bird can perform a dozen intricate maneuvers more quickly than I can turn my head.

Is the hummingbird's apparent freedom illusory, a biochemically determined response to stimuli from the environment? Or is the hummingbird's flight what it seems to be, willful and unpredictable? If I can answer that question, I will be learning as much about myself as about the hummingbird. So I watch. And I consider what I know of biochemistry. The hummingbird is awash in signals from its environment - visual, olfactory, auditory and tactile cues that it processes and responds to with lightning speed.

How does it do it? Proteins, mostly. Every cell of the hummingbird's body is a buzzing conversation of proteins, each protein a chain of hundreds of amino acids folded into a complex shape like a piece of a three-dimensional jigsaw puzzle. Shapes as various as the words of a human vocabulary. An odor molecule from a blossom, for example, binds to a protein receptor on a cell membrane of the hummingbird's olfactory organ - like a jigsaw-puzzle piece with its neighbor. This causes the receptor molecule to change that part of its shape that extends inside the cell. Another protein now binds with the new configuration of the receptor, and changes its own shape. And so on, in a sequence of shapeshifting and binding - called a signal-transduction cascade - until the hummingbird's brain "experiences" the odor.

Now appropriate signals must be sent from the brain to the body - ion flows established along neural axons, synapses activated. Wing muscles must respond to direct the hummingbird to the source of nourishment. Tens of thousands of proteins in a myriad of cells talk to each other, each protein genetically prefigured by the hummingbird's DNA to carry on its conversation in a particular part of the body. All of this happens continuously, and so quickly that to my eye the bird's movements are a blur.

There is much left to learn, but this much is clear: There is no ghost in the machine, no hummingbird pilot making moment by moment decisions out of the whiffy stuff of spirit. Every detail of the hummingbird's apparently willful flight is biochemistry. Between the hummingbird and myself there is a difference of complexity, but not of kind. If humans are the lords of terrestrial creation, it is because of the huge tangle of nerves that sits atop our spines.

So what does this mean about human freedom? If we are biochemical machines in interaction with our environments, in what sense can we be said to be free? What happens to "free will"? Perhaps the most satisfying place to look for free will is in what is sometimes called chaos theory. In sufficiently complex systems with many feedback loops - the global economy, the weather, the human nervous system - small perturbations can lead to unpredictable large-scale consequences, though every part of the system is individually deterministic. This has sometimes been called - somewhat facetiously - the butterfly effect: a butterfly flaps its wings in China and triggers a cascade of events that results in a snowstorm in Chicago. Chaos theory has taught us that determinism does not imply predictability. Of course, this is not what philosophers traditionally meant by free will, but it is indistinguishable from what philosophers traditionally meant by free will. If it walks like a duck, and quacks like a duck, it's a duck.

I watch the hummingbirds at the feeder. Their hearts beat ten times faster than a human's. They have the highest metabolic rate of any animal, a dozen times higher than a pigeon, a hundred times higher than an elephant. Hummingbirds live at the edge of what is biologically possible, and it's that, the fierce intenseness of their aliveness, that makes them appear so exuberantly free. But there are no metaphysical pilots in these little flying machines. The machines are the pilots. You give me carbon, oxygen, hydrogen, nitrogen and a few billion years of evolution, and I'll give you a bird that burns like a luminous flame. The hummingbird's freedom was built into the universe from the first moment of creation."
- http://www.sciencemusings.com/
Share Share on Facebook Tweet Tweet on Twitter Pin it Pin on Pinterest
← Back to Feed