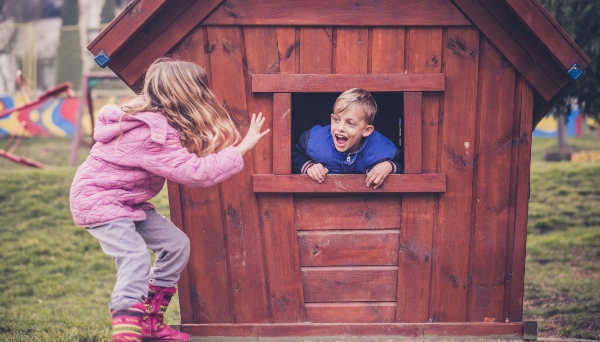 When we watch children play, we are often struck by their intensity and captivated by their engagement. Children experience delight in playing games and creating imaginary worlds. Whether inside a cardboard box teaching their teddies, sailing the ocean on a cushion, or chanting while playing ball games with friends, they are present in the moment and not thinking — as scientists do! — about the benefits of play. Children simply love to play.

The PALS group (Play and Learning Scholars Around the World) invited 400 five- and seven-year-old children (and mothers) in five countries (Argentina, Denmark, Hong Kong, the United Kingdom and the United States) to share their views about play and learning. First, in a card-sorting task, children were asked to put cards into two groups: activities that included play and those that did not. Children sorted the same cards again, this time separating cards into activities that included learning and those that did not. Children were then invited to teach a puppet from another galaxy how to play, and how it might learn something. Finally, the scene was set for the key question: ”Can you play and learn at the same time?”

Children’s responses were enlightening. Many children experienced play and learning as distinct activities. Sometimes they also argued that learning was determined by their teachers, but that they controlled what happened during play. As a five-year-old girl from Denmark noted:

Or as another five-year-old boy from Hong Kong replied, “We can only play after learning,” reflecting his culture’s emphasis on knowledge acquisition.

Nonetheless, children across the five countries reported that the worlds of play and learning overlapped in various ways. Many were aware of the learning that occurs in play. A seven-year-old boy from the United Kingdom astutely commented:

Learning How to Play

Children recognized that board games such as bingo require them to grasp a set of rules, as a seven-year-old girl from Denmark stated:

In addition to learning rules, the children highlighted that playing requires the acquisition of skills. One seven-year-old boy from the UK commented, “When you go to football training, it is learning and playing at the same time.” Activities like skipping rope or using a hula hoop require children’s sustained engagement as they work toward mastery. A seven-year-old girl from Argentina told us that “when I used to try to skip with a rope, I couldn’t do it, so then I had to see if I could do it, and at the same time I was learning to skip with a rope.” Play allows children to learn to persevere as they learn new ways to move their bodies.

Playing Affords Learning about their World

Some children not only understood that they need to learn rules and skills to play, they also recognised that play offered opportunities to learn new things about the world. “If we were playing something about animals, you would learn about animals a bit more,” said a seven-year-old boy from the US. And a seven-year-old child from Denmark commented:

“It is a game for me to play – soccer. But I also learn from that at the same time. … If you put the two together, then you are playing when you are learning! For example, the first time I played FIFA [soccer video game] it was a game to me, but I learned something as well.”

A seven-year-old girl from Hong Kong commented on learning to engage in emotion regulation during play. She said:

“When you play, you learn that you cannot just cry but also have to cheer others up when they lose. Cheering others up is what you can learn.”

Some children recognized the social nature of both play and learning. As a five-year-old girl from Denmark remarked, “Trinne and Hanne just ‘learned’ ‘me how to do it, then I could do it myself because they taught me.”

Children’s voices indicate that they appreciate the need to learn rules and new skills to play and that playing affords learning about the world around them – animals, numbers, and even how to accomplish the kind of learning they do in school, like math. Speaking of playing educational games, such as math games, one seven-year-old girl from Denmark explained:

“We have a game where there is both maths and play things [dice], that is also to play, but it is also to learn because there are those dots on it, because you know that there is five, and then there is six and then seven, eight, nine.”

Some parents and caregivers may worry about whether children are falling behind academically during the pandemic. Perhaps one way forward for these parents is to offer children playful activities that encourage learning as well. Whether it’s doing a jigsaw puzzle together that strengthens their spatial skills, or a card game that invites them to count and do addition and subtraction, there are ways to have fun and learn at the same time.

As a seven- year-old boy from Argentina said, “Playing and learning together … is more fun than learning alone.”

We couldn’t have put it better ourselves!
—

If you believe in the work we are doing here at The Good Men Project and want to join our calls on a regular basis, please join us as a Premium Member, today.

All Premium Members get to view The Good Men Project with NO ADS.

Talk to you soon.

The post Children Learn Through Play – and They Know It! appeared first on The Good Men Project.