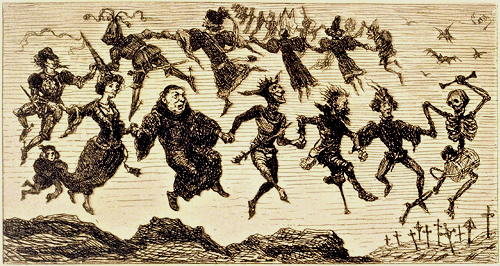 "Dance Macabre"
by Jim Kunstler
"Western Civ’s most infamous encounter with pandemic disease, so far, was the big first wave of the Black Death that had a marathon run from 1346 to 1353. That bug was the real deal. It killed folks left and right, every age group, every social station, and it killed them ugly. Few who caught it survived. Up to half the population of Europe perished, along with a lot of their social and economic ways.
The cause of the Black Death was subject to every possible explanation except the actual one, Yersina pestis, a bacterium associated with rats and their insect parasites, fleas and lice, who also enjoyed an association with humans living in the generally squalid conditions of the day - the ancient Roman habit of bathing long forgotten. At the top of their list of causes was an angry God, and his wicked erstwhile subordinate, Satan. The “experts” of that time tended to cluster in the church hierarchy, with its drear obsessions and compulsions.
The squishy boundary between the supernatural and reality loosed all manner of derangement. The Jews came in for much vilification, leading to massacres in Strasbourg, Mainz, and Cologne. On the whole, the episode represented a terrific humbling of humanity. The allegory of the Dance Macabre summed it up in mankind’s universal antic journey to the Palookaville of death.
On the plus side, as modern interpolators might say, the bubonic plague winnowed down Europe’s population to a scale more congenial with its resource base. After that big first wave of the disease, land was cheaper and human labor better rewarded. Eventually, more food got around. Incidentally, the plague provoked nostalgia for the classical antiquity of Greece and Rome, especially among the scholars of Florence, launching the extravaganzas of the Renaissance, the Enlightenment, and eventually our own pageant of techno-supremacist Modernity.
Covid-19 seems rather a punk-ass illness compared to the Black Death. Its victims by far are people already on a fast track to the last roundup. We know exactly what causes it, if not so exactly its origin, and yet the response among our experts has been far more ambiguous than those long-ago bishops of Christendom to the Great Plague. The various scientists, physicians, public health officers, and politicians seem, to the casual observer, about equally divided between those who consider the corona virus a grave threat and those who insist it’s hardly worse than any annual flu. What is one to believe? Or do?
Which brings us to the verge of the Great Opening-up. The current nostalgia for pre-Covid-19 business-as-usual is understandably intense. Gone especially from daily life are all the ceremonies of human togetherness, from gatherings of friends to the casual shoulder-rubbings of urban life to the crowded venues of the lively arts to the great moiling orgies of pro sports. The life of the perpetual jigsaw puzzle, YouTube, and Netflix has proved inadequate to human aspiration. Gone, too, are livelihoods, revenue streams, and rewarding roles in everyday existence. The itch to get out and do, get out and make, get out and be, is overwhelming.
Behind those plain yearnings, though, looms the specter of a system that appeared to be already foundering before Covid-19 entered the scene. There is, at least, considerable agreement that the disease catalyzed the disorders of finance and economy and accelerated the damage ­— just not among the people most responsible for engineering the fragilities that actually crashed things
Jerome Powell, Pope of the Church of the Federal Reserve went on the 60-Minutes show last night to reassure the nation that things will eventually get back to normal. “I think you’ll see the economy recover steadily through the second half of this year.”
Yessir, if you say so. Were his fingers crossed? You couldn’t tell because the camera had him framed in a head-shot. Personally, I think the Fed Chairman was blowing smoke up the nation’s wazoo. Spooky as it’s been, the Covid-19 virus has also been a great cover-story for the natural collapse of a severally unbalanced, ecologically unsound, and dishonestly represented set of arrangements that are now unspooling at horrifying speed.
The car industry is dying. The airline industry is laying out its fleet of big birds in desert graveyards. The college racketeering operation went off a cliff, along with medical profiteering. Agribusiness no longer has a business model. Hundreds of kinds of services no longer have customers who can afford their offerings from acupuncture to zymurgy. None of that will be fixed by injections of miracle money borrowed from ourselves in quantities that would turn every US citizen into a millionaire - if it wasn’t just pounded down the rat-holes of the stock and bond markets.
The big question about the Great Opening-up is when the recognition of all that turns to raw emotion. Covid-19 may still be with us then, but it will be the least of our problems. The masks will come off. The dance will commence."
- https://kunstler.com
Share Share on Facebook Tweet Tweet on Twitter Pin it Pin on Pinterest
← Back to Feed