Your cart
Yesterday was a mostly quiet, drizzly day. After our pickleball game was canceled due to the rain, we spent about thirty minutes there practicing before the rain picked up. While Bruce did some reading, I made another rhubarb pie using the new technique. 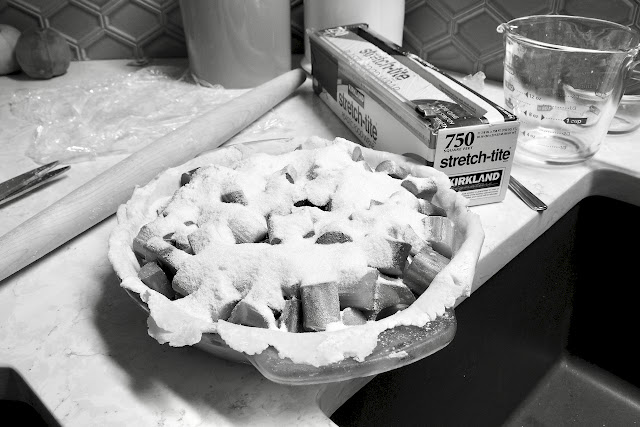 No stretch-tite, no pie crust, as far as I'm concerned. Rather than use a floured countertop, I put two sheets of plastic down, followed by my ball of dough, covering it with flour and more plastic. The only way I've ever successfully brought crust to pan. Later on, Bruce went to help Bill with something, while I worked on a new jigsaw puzzle. All the while, it lightly rained.

Eventually it was dinner time, and we sat down to a very scrumptious dinner, if I do say so myself, remarking to Bruce that it was like a date night. At the same time, there was a group text going around between some friends here at LPV. One asked, "how was your day", another replied, "quiet, mostly reading." All those texts began at 7:13PM. Sitting at the kitchen table,  having a slice of the pie, we heard a very loud sound, both of us at the same time saying, "did you hear that?" We rushed to the back sliding doors in time to see the wind lashing the plants and rain splattering the windows. I was not brave enough to open the door, so I took a photo through it. 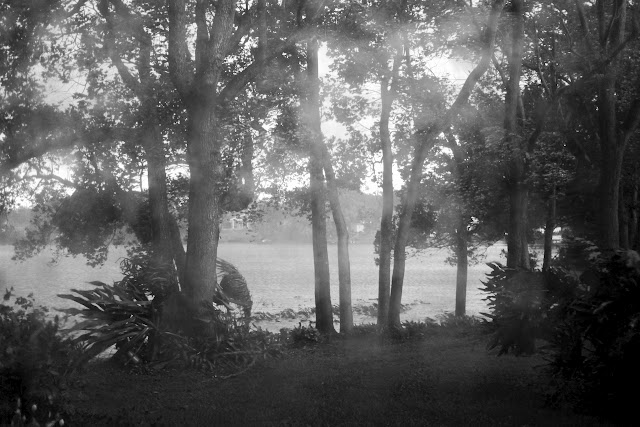 Looking at my photos this morning, following a drive around to see the damage, the time was, 7:22 PM. And then it was over, with only light rain falling. As you can imagine, we were all in shock, in part because it happened so fast, and in part because most all of us have never lived through a tornado. Make that seen a tornado, let alone live through one! Loads of people emerged from their condos to see what had just happened. The texts were flying, Connie who lives just above us had tried to open her sliding glass door to see what was going on, impossible from the pressure. She did see the lake in turmoil. David was talking with Alan when they began seeing things flying in the air about 100 feet above them. Gayle texted that she had a large piece of siding outside her place. There was a float in a tree along with more siding just down the way from us. 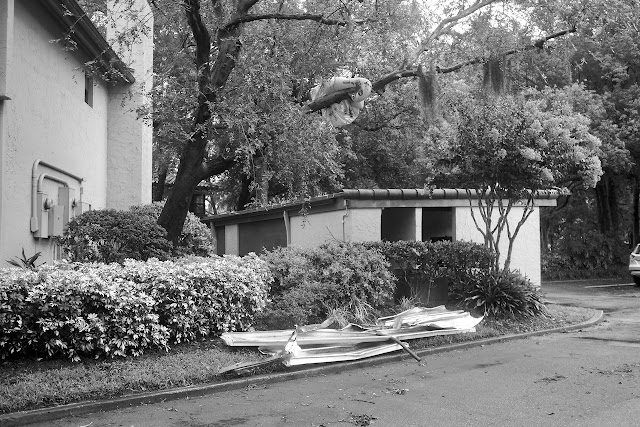 It was soon thereafter that we explored the lakeside behind our place, seeing the damage across the lake, where once there was a wall of trees and shrubs, now looked decimated. The power was out, the power was on, the rain fell lightly, and then it rained like a son of a gun after dark. In all, we got about 2.5 inches of rain in very short order. Thankfully, the power came back on in time for bed as it was so hot and humid it would have been a long night without AC.

This morning, first thing I went out with my camera to see what I could see. Our little tree, while still standing, bent over a bit. The air was so humid, I kept wiping my camera lens to get some photographs! 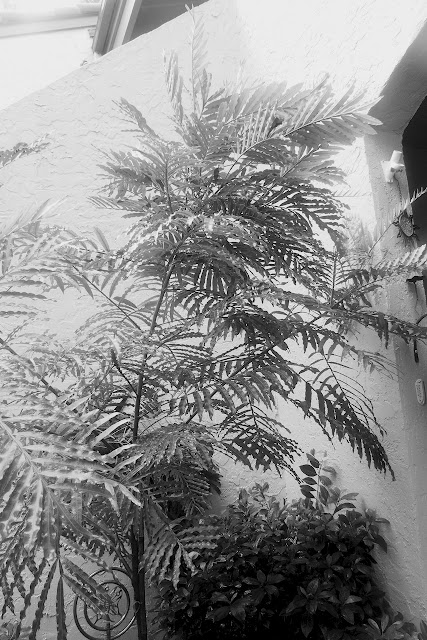 The aquatic plants also took on a new look from the wind, as did the shore across the way. 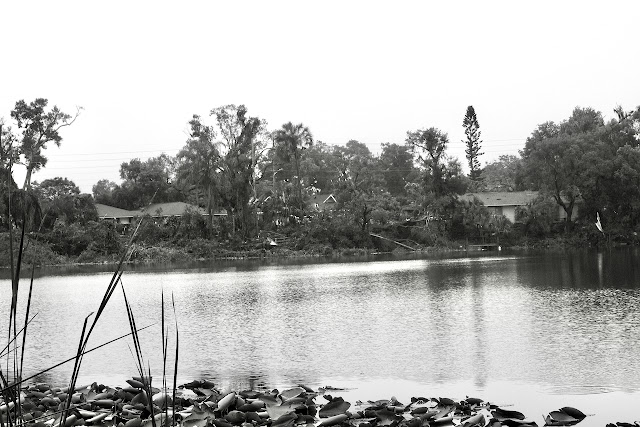 For the most part, we normally would not have seen the houses over there. It was not just metal that flew, just behind the house an Anhinga perches on some 2X4's floating in the lake. 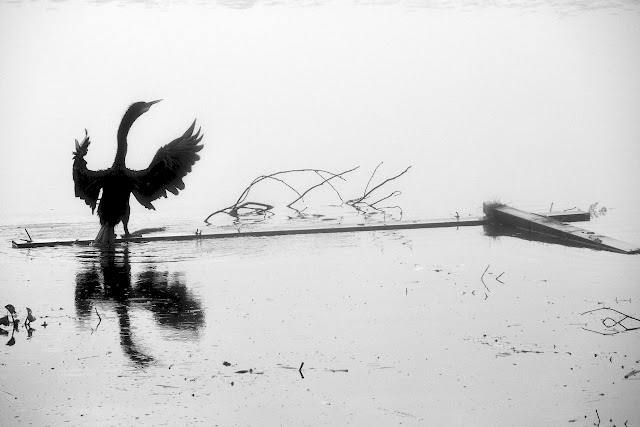 Bruce and I went looking to see the damage which was quite shocking so close to home. A fireman is getting his drone ready for overhead images. 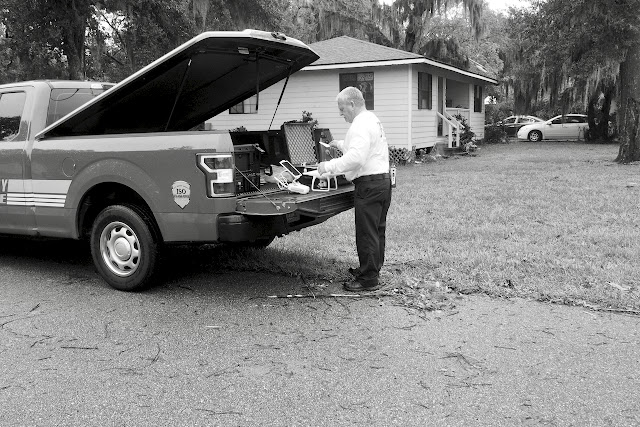 There are several streets on the East side of the property that took a beating. 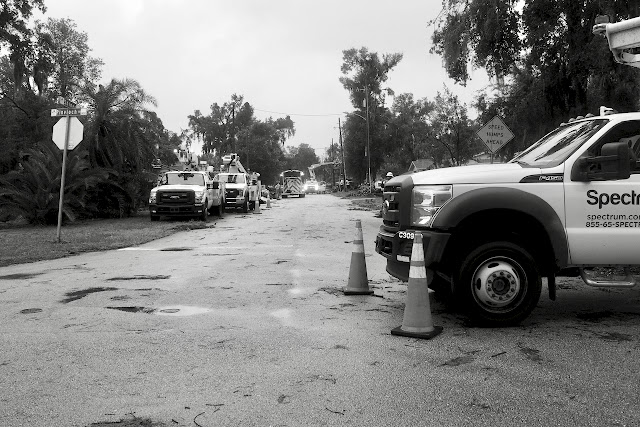 Welcome to these poor folks nightmare. 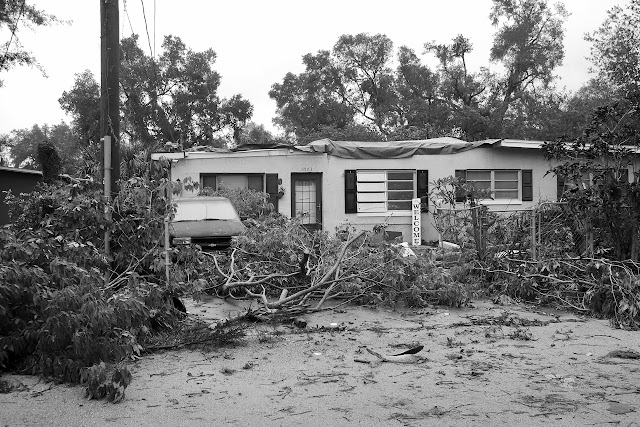 As we turned onto Ferncreek, I thought this sure didn't take long to appear. 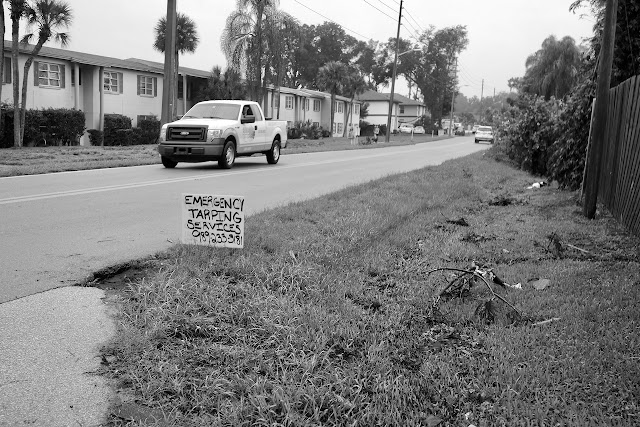 Not far, as in yards from this sign, the extensive damage begins to come into focus. This house is on the opposite corner of the lake from us. Sadly, that is a new fence. 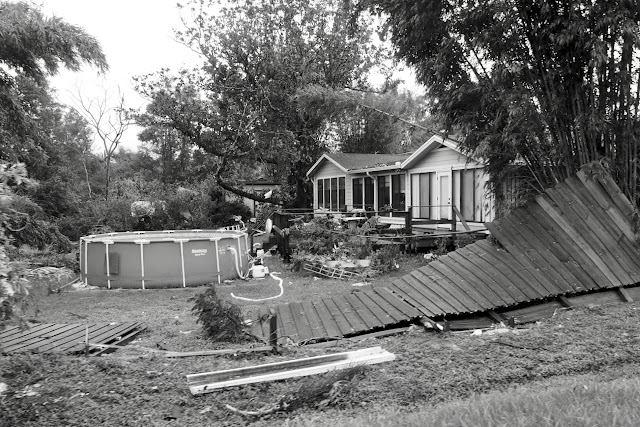 Trying to get a shot of the damaged foliage and trees, I showed up in the photo. 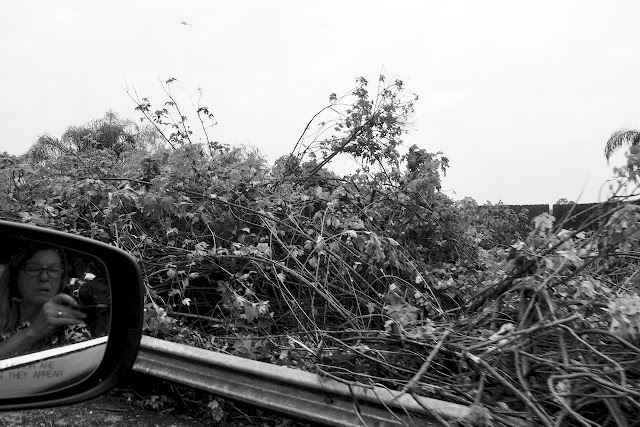 The opposite side of the street was a mess. Our hearts go out to these folks. 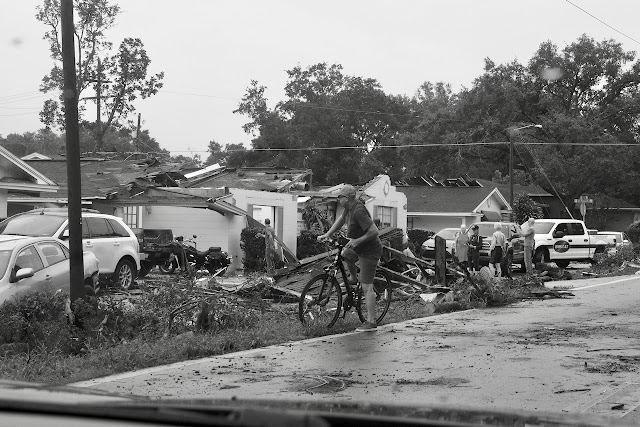 We learned from Sandy's best friend  who lives near here, not far from Maureen's house, that the damage on her street was extensive. "Honey, let's check out Maureen's street please." Indeed, her home is on Martin Street. 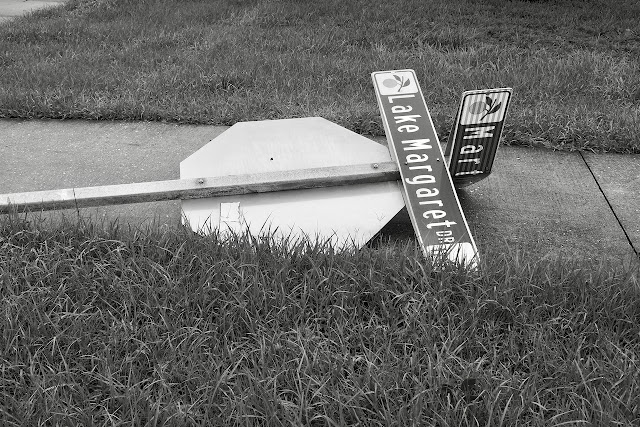 The downed street sign is on one corner and the overturned trailer on the other. 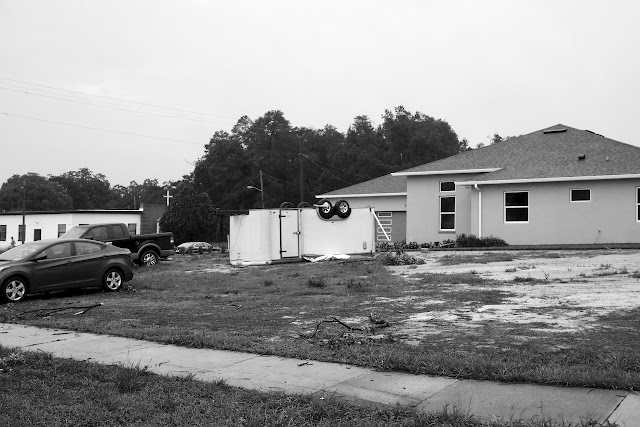 About a block down Lake Margaret, an entire block wall came down. 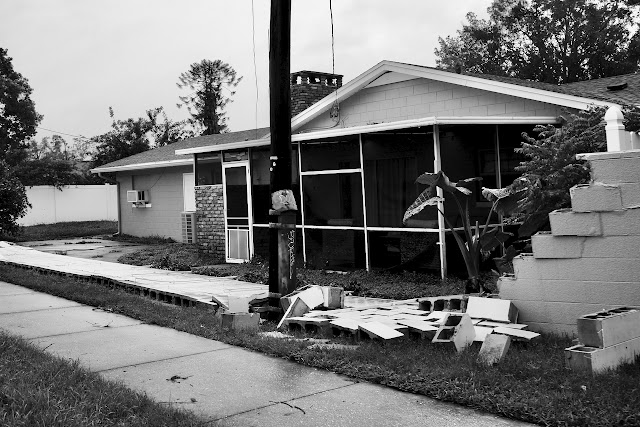 Turning down Martin, we came to a stop because a tree blocked our progress. 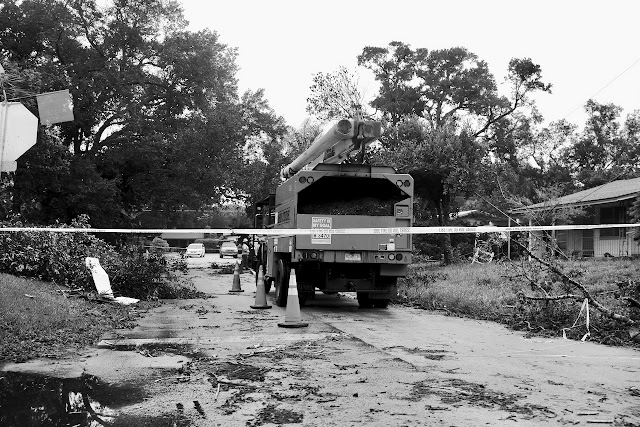 Having lived in the area forever, we knew another way, down Simonton, where the house just around the corner from Maureen's looks like this. 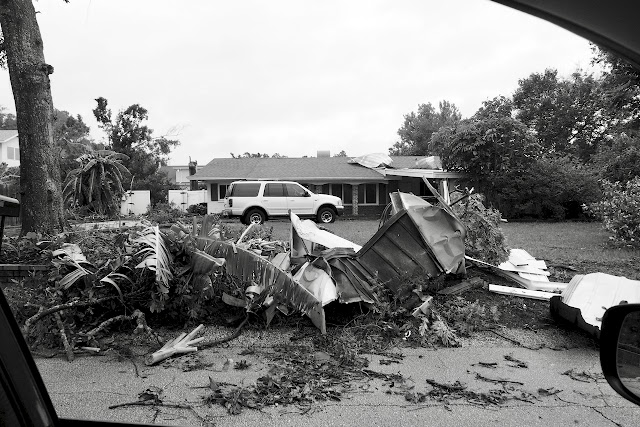 Fortunately, her house was mostly spared, but the next door neighbor had a tree blow over. 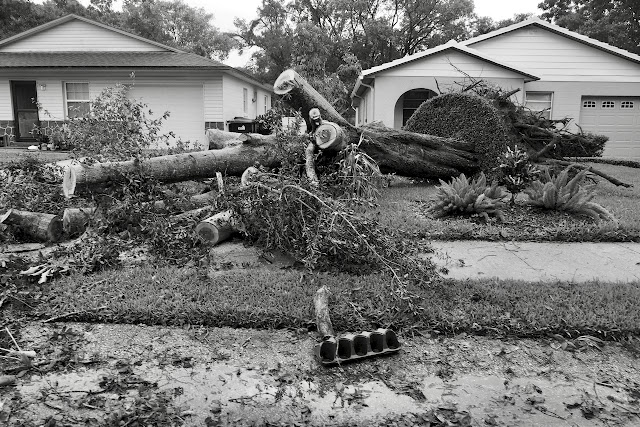 Loads of folks were clearing the mess at the church across the street, picking up all of the playground toys that were strewn everywhere. The corner where Sandy's friend lives nearby was a mess and again, our hearts go out to these folks who had towels hanging along their fence, probably used for mopping up the rain that poured in. 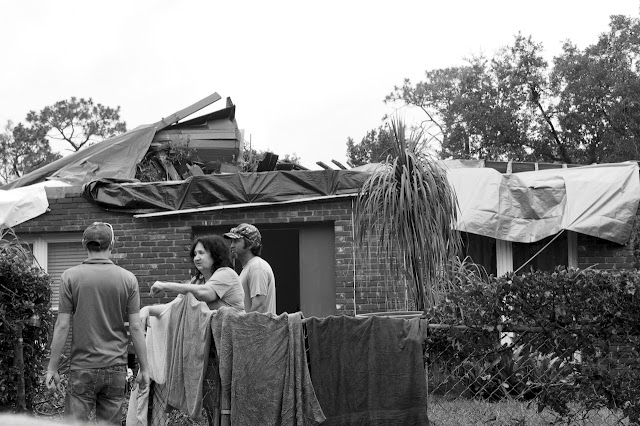 Just across from them, this stop sign says a lot. We are used to hurricanes, but tornados are an anomaly around these parts. I neglected to mention that we did get a tornado alert on our phones, but because it is so rare, we don't take those warnings seriously. Except this time, indeed a twister came through. 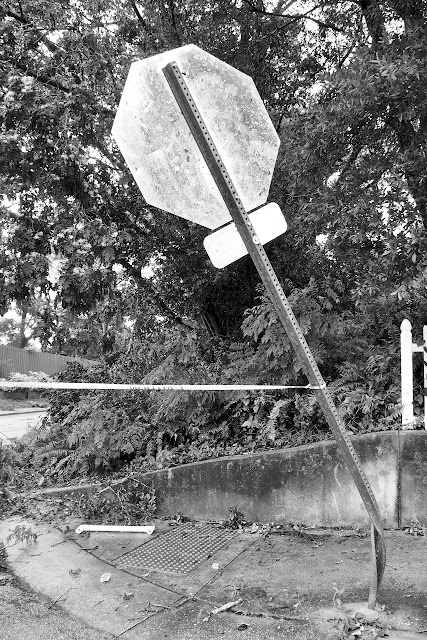 Having lived in a home with massive trees for more than twenty years, we've cleaned up after many a storm, but never a tornado. The temperature right now is only 82 degrees, but with the humidity at 80%, it allegedly feels like 93 degrees. Working in that kind of environment is such misery. 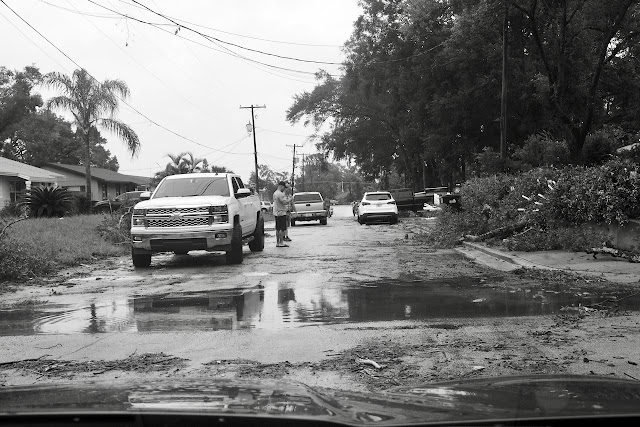 And yes, those are fence posts sticking through that downed tree.

What did we learn from this experience? Never say never would be one thing. And there is that little thing about how life can change in an instant, and although we'd like to think we are in control, well, you be the judge.