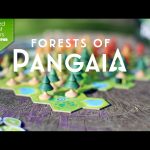 Here are a few games and game-related projects that are currently on Kickstarter—a few of them end very soon, so check them out!

New to Kickstarter? Check out our crowdfunding primer.

It’s hard to believe that the Casual Game Insider is going into its 10th year already! This quarterly magazine highlights tabletop games that are easy to pick up and learn, so if that’s the type of game you enjoy, it’s a great source of information about games worth checking out. Plus, the magazine started including a free print-and-play game (pre-printed in the magazine, that is), so you get something to try out when your issue arrives.

Van Ryder Games is back with another set of Graphic Novel Adventures! These are like choose-your-own adventure comic books: you’ll read a section, and then come to a decision point, with panel numbers labeling the various paths you could take or things to inspect. The fourth season includes some sci-fi, some fantasy, and another title in the Sherlock Holmes line, or if you’ve got your pennies saved up, you could get all four seasons together.

Forests of Pangaia from Pangaia Games

Okay, I’ll admit that I don’t know a whole lot about this game or the publisher, and it does have some echoes of Photosynthesis since you plant seeds and grow trees, but I’m just taken by the little wooden trees (with the nesting tops to “grow” them!). You have an animal spirit that you move around and I don’t think it’s about blocking sunlight, so there are some differences there—mostly it just looks gorgeous and I want to give it a shot.

Villagers is a lovely tableau-building game that I backed a couple years back, and now its first expansion is on Kickstarter, adding events, special villagers, a new resource, and a new, more relaxed solo mode. And if you missed the first campaign, there’s an opportunity to get caught up on some of the promo items as well.

These jigsaw puzzles are a bit like Where’s Waldo with their busy illustrations full of little details, and also remind me of MicroMacro because they tell stories. Rather than being a snapshot of a moment in time, the illustration may depict the same character multiple times to show what they’re doing, where they’re going, how they’re changing. To preserve the mystery, the reference image you can use to assemble the puzzle isn’t exactly the same as the image on the puzzle itself. And once you’re done with the puzzle, you open up the envelope to read the secret ending! There are three puzzles available, with illustrations by different artists around the world, and they look like a lot of fun.

Songs for your world by Geoff Rowe

Geoff Rowe wants to write a song about your D&D campaign—or whatever other tabletop world you might be immersed in. He’s planning to write and record 100 songs, so allow for a bit of time to receive your song, but it sounds like a fun way to immortalize some fun moments in a memorable campaign.

Click through to read all of "Kickstarter Tabletop Roundup" at GeekDad.If you value content from GeekDad, please support us via Patreon or use this link to shop at Amazon. Thanks!