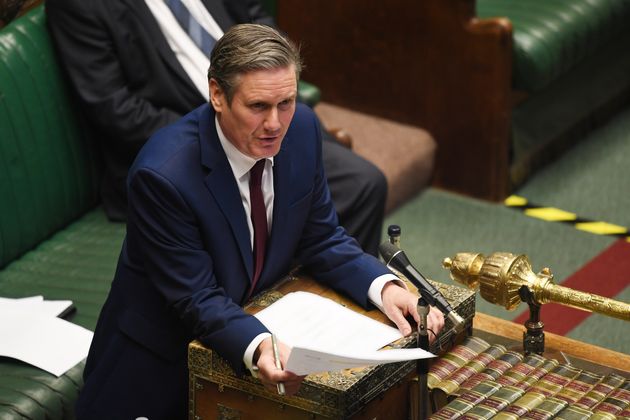 You’re reading The Waugh Zone, our daily politics briefing. Sign up now to get it by email in the evening.

On the day that Keir Starmer removed Jeremy Corbyn’s general secretary Jennie Formby earlier this month, the Labour leader was politely brutal. Formby had left by “mutual consent”, he said, because “we need to move on as a party”. And the number one priority of her successor should be to “focus on winning the next general election”.

It was a clear signal that Starmer is heartily sick of the era of internal politics that has characterised the general secretary post for more than a few years. He wants someone who is both a highly competent administrator and proven campaigner, but not someone who has an eye on the next vote in an NEC meeting. “We need to call time on the factional fixer model,” is how one ally puts it, referring to both the Formby and Iain McNicol eras.

While he may want a ‘non-factional’ future, Starmer has to use his authority (and the varied pro-Starmer factions) to get there. But as the past few days have shown, he’s also unafraid of being ruthless about it. When the Left of the party pulled off a rearguard action to take control of the general secretary shortlisting process, Starmer decided to bide his time. He got the process extended and used the delay to ensure his ‘favoured’ candidate David Evans had a path cleared for him.

At today’s NEC meeting there was a reminder that hand-to-hand combat has not gone away. Starmer’s attempt to expand the longlisting panel with his allies was met with a flat out refusal by chair Andi Fox. The panel still has a Left majority, unlike the wider NEC, where Starmer has between 18 and 21 of the 38-strong ruling body. If for some reason that panel decides it doesn’t want Evans when it longlists this Thursday, the whole NEC could well revisit the issue next week.‌

But Starmer’s ruthless streak comes with a cost. Unite’s Anneliese Midgley had been seen by many as exactly the kind of uniting figure the party needed, complete with a strong campaigning background. Her decision not to apply followed a lack of encouragement from Starmer’s team, which itself left a sour taste in the mouths of those of the Corbyn Left who had supported his leadership campaign.

The irony is that Midgley’s Unite links were seen by some as an “an optics problem” externally for the new leader, though internally most knew she worked with all wings of the party (as MPs’ Twitter love for her today proved). Now Starmer has a different kind of optics problem. “A white man leader [Starmer], white man chief of staff [Morgan McSweeney] and white man GS [Evans] is not a good look,” as one party insider, themselves a Starmer supporter, put it to me. Several women, including Momentum-for-Starmer tribune Laura Parker, expressed their unease.‌

Given the fact that Labour operates a secret ballot vote for its general secretary, it’s perfectly possible that Evans’s progress could be derailed. Irritation among some swing NEC members at being bounced could manifest itself with a vote for another candidate, possibly former Cooperative party chief Karin Christiansen.

Still, Evans remains the favourite for now. And if he does get the general secretary job, another piece of the jigsaw puzzle that is ‘Starmerism’ could slot into place. Evans is a former assistant general secretary and north west regional secretary who knows how to campaign in the northern Red Wall as much as in marginal London areas like Croydon and Hammersmith.

Although some see him as ‘Blue Labour’ before the term was discredited, others say he is much more interesting than that label. A believer in values-based analysis, his main thesis is that Labour can only win if it builds a coalition across aspirational voters, metropolitan voters and those voters motivated by safety and security concerns (strong on law and order, national security, patriotism). He correctly foresaw that the Brexit earthquake would play out in 2019 more than it did in 2017.‌

Starmer’s new head of policy, Claire Ainsley, offers another clue too to the direction the party may take. Ainsley’s 2018 book The New Working Class is required reading among Starmerites as it describes the need to appeal to the ‘precariat’ of low-paid workers in call centres, online delivery vans, cleaners and yes care workers. And again it’s their values as much as their economic status that defines them: a belief in hard work, fairness and family.

But when it comes to ‘fairness’, immigration is a policy that shows how difficult the new direction could prove. Ainsley has backed the idea of - wait for it - a points-based immigration system (though crucially not one whose salary cap excludes care workers). On Monday, Labour voted against the second reading of the Immigration Bill that would enact a points-based system, partly because of care worker concerns.‌

New shadow home secretary Nick Thomas-Symonds went on the front foot to declare the bill was against the ‘national interest’ because our NHS and care homes relied on 180,000 overseas staff to function. But several Labour MPs were still extremely worried about the signal that the vote sent to those voters who want a ‘fairer’ immigration system.

A handful told the whips they would not vote (Yvette Cooper was the only MP to go public) but many more did so with gritted teeth. “A significant number of us were incandescent at the whip,” one backbencher tells me. “Yes, we sent the voters a message alright, and the message was fuck off.” Some believe the Tories are already storing up 2024 campaign slogans that Labour voted against controlling immigration, leaving Starmer exposed on his varying positions on ending EU free movement then loving free movement.‌

For now, the Starmer Army is just pleased that he’s showing the steady progress required in lots of other areas. But some Labour MPs believe that once the Covid crisis is less salient, Starmer will need to focus relentlessly on his new agenda of reshaping Britain to reflect the values of the voters, while offering credible policies for those facing job insecurity. The Labour leader is beginning to impose his will on his party. Winning over the electorate is the much more difficult task. The two, however, are not unrelated.

Quote Of The Day

“We’re likely to face a severe recession the likes of which we have not seen, and of course that will have an impact on unemployment.”

Any changes to the lockdown need “a highly effective ‘track, trace and isolate’ system to be running first, MoD scientist Angela McLean said. Any changes to social distancing should be based on incidence of the virus “not on a fixed date.”

Her remarks followed Work and Pensions Secretary Therese Coffey telling SkyNews: “If the science was wrong, [if] advice at the time was wrong, I’m not surprised if people will then think we then made a wrong decision.”

Latest estimates suggest there have now been 55,000 excess deaths in the UK since the pandemic started. The ONS said 11,600 people have died from coronavirus in care homes.‌

Martin Green, chief exec of Care England, told MPs that the government had a “policy of emptying hospitals and filling care homes” early on.

Labour cancelled its annual conference. The Lib Dems are expected to follow suit, but the Conservatives are still ‘planning’ to go ahead in Birmingham.

Environment secretary (and former fruit farmer) George Eustice urged Britons on furlough to apply for fruit picking jobs to make up for lower numbers of Eastern Europeans in the UK this summer. He directed people to the pickforbritain.co.uk website.

Michael Gove published a 291-page draft comprehensive free trade agreement with the EU. Some trade experts swiftly said it seemed almost designed to fail, while a survey of social scientists found 71% do not expect a deal to be struck this year.

Second World War veteran Captain Tom Moore is to be knighted after his heroic efforts to raise money for the NHS.

Each week, the HuffPost UK Politics team unpack the biggest stories from Westminster and beyond. Search for Commons People wherever you listen to podcasts and subscribe.