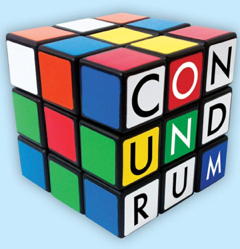 "The Great Conundrum"
by Jim Kunstler
"Don’t it always seem to go, that you don’t know what you’ve got ‘til it’s gone, Joni trilled half a century ago. Another song, by CSN, went, it’s been a long time coming, it’s gonna be a long time gone. Boomers. Back in the day – before they invented the hedge fund, glyphosate, and political correctness ­– they had a way with the deep vision thing. And now, here we are! Just like they saw it.
Open up is code, of course, for return to normal. You’re kidding, right? Where I live, the future happened ten years ago. Main Street is nothing but consignment shops, that is, old stuff people got rid of, mostly for good reasons. The one thing you can’t get there is food, unless there’s a bowl of mints next to the cash register. Oh, and the Kmart in town shuttered exactly a year ago, so the supply of new-stuff-waiting-to-be-old-stuff has been cut off, too. Welcome to America, the next chapter.
The public is understandably frantic to bust out of their quarantine bunkers. Seven weeks of jigsaw puzzles bears an interesting resemblance to the old Chinese water torture. (Can you even say that? There, I said it for you.) What will they find as they emerge blinking from the doleful demi-life of the sequester? It’s liable to be a society in which just about everything no longer works the way it was set up to work.
For instance: work itself. A lot of it has gone missing. Despite the feel-good propaganda broadcast on CBS’s '60 Minutes', converting General Motors’ Kokomo plant into an emergency respirator manufacturing operation is not going to save that company, or the greater mission it serves: US suburban life per se. The car industry was on-the-ropes before the Covid-19 virus landed. Car dealers were so desperate to move the merch off the lot last year that they attempted to induce folks who had already defaulted on their car loans to come sign up for another car and a new loan. And that was after they’d tried seven-year loans for pre-owned vehicles. General Motors sold 7.7 million vehicles last year, while the whole US auto industry sold 17 million. They are not going to survive as boutique car-makers.
Which leads to the Great Conundrum of the moment: Reality is telling us that things organized on the gigantic scale are entering failure mode; but so many Americans are employed by exactly those activities organized on the gigantic scale. Or were, I should say. The humungous joint effort by the federal government and its caporegime, the federal reserve, to flood the system with dollars is precisely a desperate effort to prop up the giant-scale activities that defined the prior state-of-things. Those giant enterprises even did an end-run around the truly small businesses that were supposed to get scores of billions in grants, loans, and bailouts so congress is attempting a do-over of that play.
The question, then, is how do you go through a swift and dramatic re-scaling of a hypertrophic, excessively complex, ecologically fragile economic system in a way that doesn’t produce a whole lot of damage? I can’t answer that satisfactorily except to say this: at least recognize what the macro trend is (downscaling and re-localization), and support that as much as possible. Don’t knock yourself out trying to save giant, foundering enterprises that need to go out of business. Don’t bankrupt the society or destroy the meaning of its money to prevent the necessary bankruptcy of things that must go bankrupt. Remove as many obstacles as you possibly can to allow smaller-scaled enterprises to thrive and especially to support the rebuilding of local networks that smaller-scaled businesses play their roles in.
Apart from the insane spending orgy of the fed-gov and the fed, a lot of this is already underway organically and emergently. Few have failed to notice the death throes of national chain retail, for instance. Macys, JC Penny, Neiman Marcus and many other outfits like them are whirling around the drain. By the way, even the holy sainted Walmart will not be immune to this trend. Its supply lines have been cut. And, as I averred on Friday, Amazon’s dumb-ass business model will sink with the oil and trucking industries. Realize, too, commerce will persist in human life. It just won’t be the Blue-Light-Special, credit-fueled phantasmagoria we got used to for a few decades. Commerce, i.e. the trade in goods, will have to be reorganized differently. There are huge opportunities for young people who recognize this.
All this remains to be worked out, and quite a work-out it is apt to be before we get to it. Even with those glorious $1200 checks, millions of people know just how broke and how probably screwed they are. They are being let out of confinement just as fine spring weather sweeps across the land. It will be momentarily exhilarating. Then, the rage and resentment will percolate up and the bile will rise. Before you know it, they’ll be singing that other old Boomer refrain of yesteryear (the Rolling Stones): Summer’s here and the time is right for fighting in the street…"
- https://kunstler.com/
Share Share on Facebook Tweet Tweet on Twitter Pin it Pin on Pinterest
← Back to Feed