Back in November, when I began this massive scrappy quilt, if you had told me that it would take me until the first week of August to finish the top, I would have thought you did not know me very well. You see, when I begin a project, I generally get going and don't stop until I'm done. Not so this time! Had it not been for discovering podcasts, I would still probably be putting 2"x3.5" pieces of fabric together! 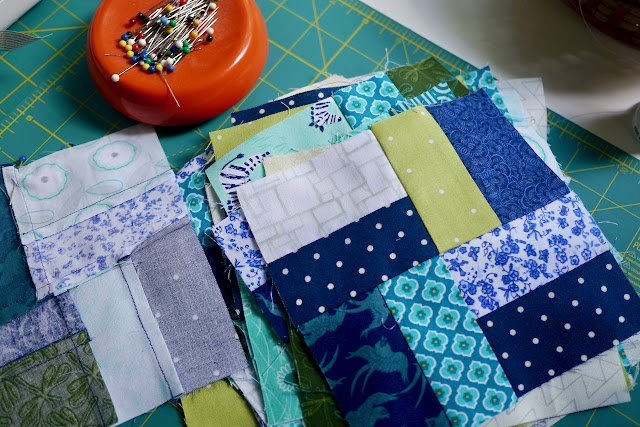 My listening took me all over the web, including the Alaska story, America's Test Kitchen, and many excellent episodes of How Stuff Works. While I did not listen to any of these episodes, I now want to because they are so darn interesting. I did learn about jigsaw puzzles, including that the first one was made by a London mapmaker. Lots of really interesting information about how soap works, the difference between soap and detergent and when people actually began using it on their bodies. (not really that long ago) Miniature golf baby! Yes, there is an entire segment devoted to that, and it is just as interesting as you can imagine. Speaking of jigsaw puzzles, Bruce did one on his own for the very first time and he liked it! Sort of, anyway. There comes a time when one is doing a puzzle that the thought crosses one's mind that there must be some missing pieces. Generally, or at least in my limited experience, that is not the case, although for a moment, convincing Bruce of that took some doing. 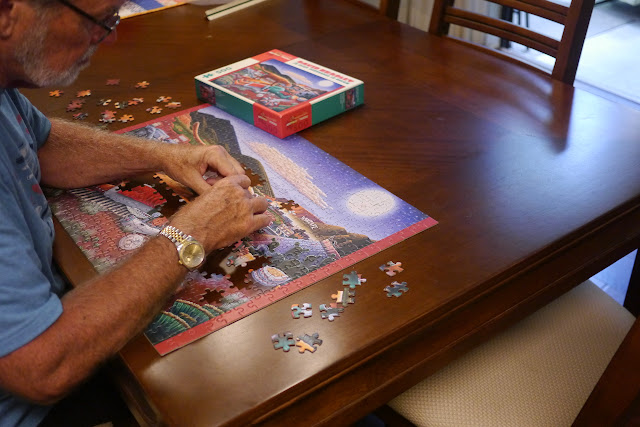 So here is the finished top spread out on the floor after moving the furniture because it is so darn BIG! How big you ask? BIG, as in 90"x96". 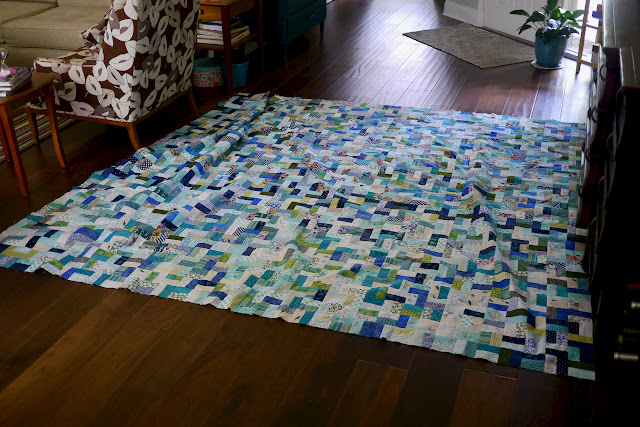 Well, you can't just have a top can you? No, you cannot, so making the backing was my next task using a variety of fabrics that have been stored in baskets under my sewing/blogging table. The good news was that in those baskets were several pieces at least two yards long and one piece of vintage fabric that was about 4 or more yards long. How do I know it is vintage you wonder? Because it is but 36" wide and they haven't made that width in a very long time. It's the one with the small flowers on it, but you guessed that already I bet because there is so much of it used. 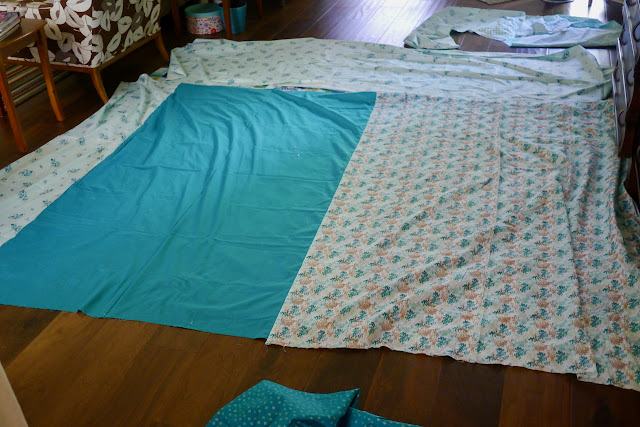 The last part I need to make, aside from the quilting, is the binding, something lots of folks wait to do just before they need it. I, on the other hand, prefer to make it now and when it is needed, there it is waiting patiently for me. I've yet to decide on who exactly will do the quilting, but for now that is a moot point because batting is hard to find at the moment. In spite of it being offered as Prime on Amazon, it won't arrive until late next week. Which reminds me, does anyone imagine that Amazon will offer extensions on our memberships because they have not been able to deliver many goods within two days?  But, I digress.
What about the current shortages of goods surprises you the most? Gutterman thread is also hard to get, something I could never have imagined, pre-Covid. As far as sewing is concerned, I'm thinking it is making a big comeback, somewhat like home cooking. Neither are new to me, but for some folks this business of making three meals a day is getting very old. Or not? Are there converts out there that are enjoying feeding themselves and their family if they have one? I will admit that procuring ingredients poses some challenges, but thankfully between Clemons and Publix, plus an occasional visit to Costco, we've mostly been able to get what we need/want. One product though remains elusive and that is Claussen's pickles, so we have taken to making our own. In a surprise move, Bruce spent some time in the kitchen making hot pickled cauliflower that is still brining; already it is far too hot for me! Speaking of Clemons, they've had some yellow seedless watermelon lately that I purchased for Bruce. He tells me that while it is good, it won't replace the traditional pink for him. 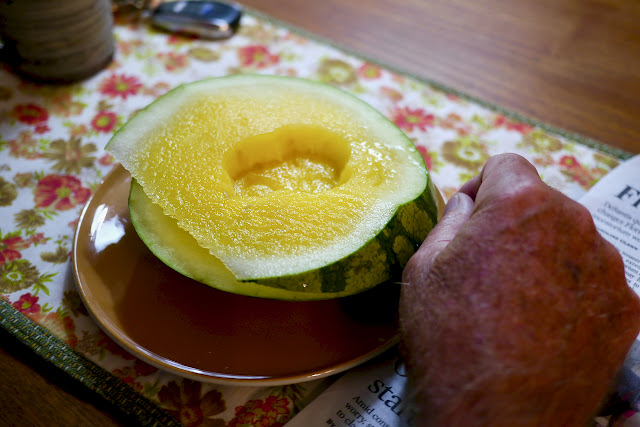 In my last post I mentioned that Ann was our fairy godmother, and in this post it is Nancy who sent me a care package with FOUR skorts for playing pickleball along with two dresses to boot! The dresses, while not pictured, are perfect! My female pickleball friends, I must admit, are a wee bit jealous of that Lily with the cute little rackets and pleats. 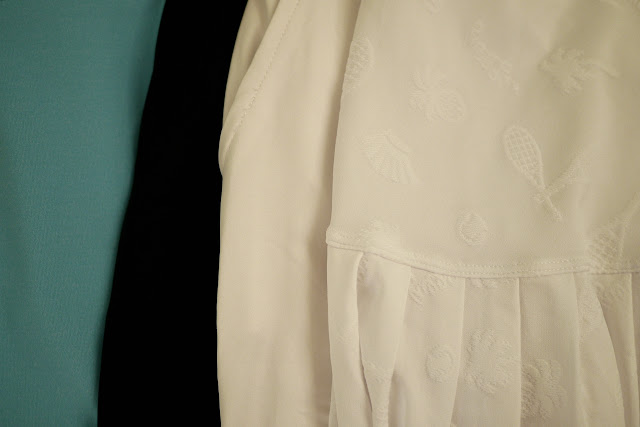 Should you have been wondering what a pickleball paddle looks like here is mine which is unique to our group, making it easy to find in the rack amongst about six or so of the same. 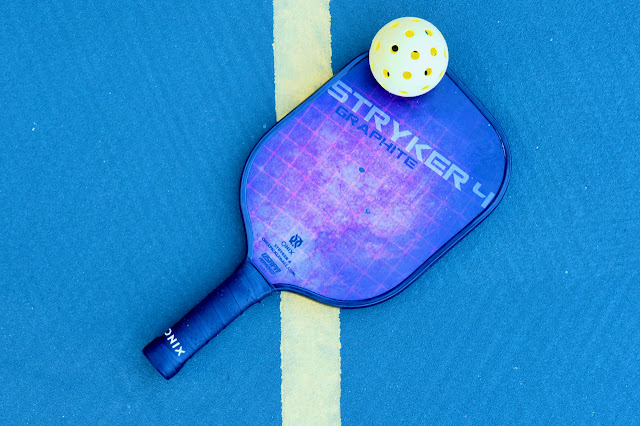 Today Bruce helped Bill with his wood flooring and I played a bit with the ladies. A bunch of the news around here is weather related, as we've had part of a big oak tree go down by the tennis courts while the weather was sunny, barely missing someone as they drove in through the gate. Before much of anything could be done, aside from cleaning up the debris, a massive storm came through late Monday afternoon. Serious wind, massive thunder and lightning, along with almost 3.5 inches of rain came as a surprise because it was so strong, enough so that our little tree took a thrashing. Not to mention we had no dire warnings from the weather folks. 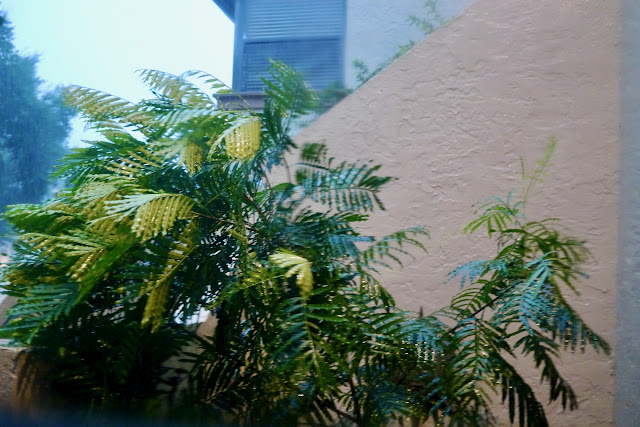 Yesterday afternoon Bruce put stakes on it because, if history is any guide, we are in for more big storms before summer's end. In fact, the wind is whipping up the lake as I type. By the way, if anyone knows someone who is looking for a wonderful place to live, our friend Nancy is moving soon and her place will be up for sale. It is a 3/2 upstairs unit just around the corner from us. She has lived here for more than twenty years and her next stop is a lovely 11th floor apartment at Westminster Towers. I've no doubt she'll be making friends there soon.

Back to the storm, remember I mentioned the tree limb falling a few days prior? Well with such strong winds and a weakened tree, another huge limb came down in about the same spot. 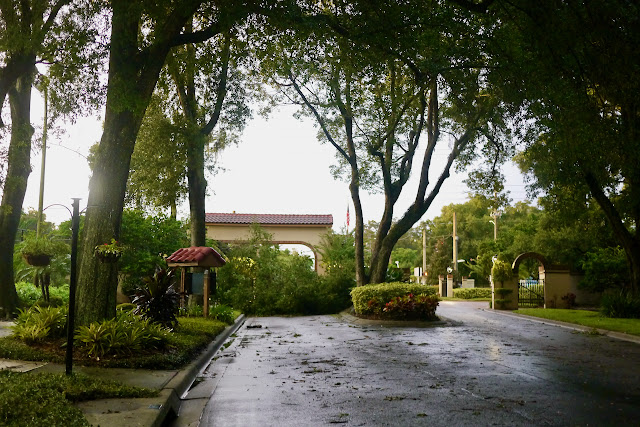 Here's what it looked like the next day from the entry.... 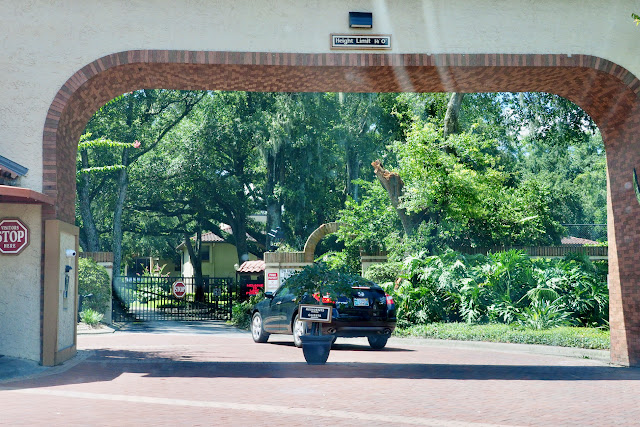 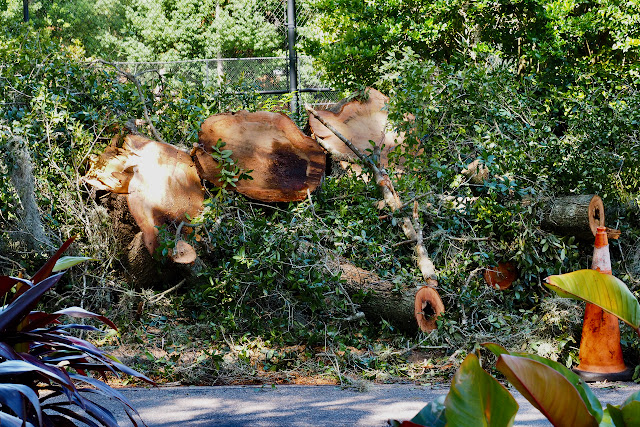 The visible fence is the tennis courts which are now in more sun than is optimal, but that's what happens when there are giant old trees. We can only hope that this is the only one that has to be removed during storm season!

When I first began selling photography, Roger kept trying to convince me to begin selling canvas prints stretched on bars. It took me months to get up the nerve, not to mention anguish over what I thought might sell because I had to buy them first and what if no one liked it? Eventually I settled on a sunset that I titled Solid Gold. The funny thing is that it didn't take long to sell it and the person who bought it was the market manager, the very same woman who once would not accept me as a vendor! Anyway, following the storm, the color of the sky reminded me of that time in my life. 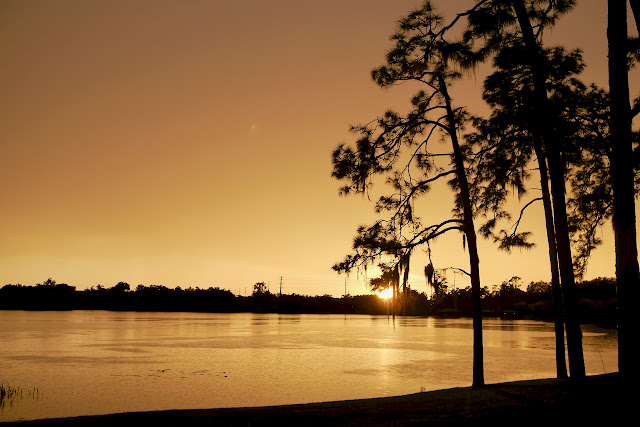 In other sky related news, I saw Venus next to the Moon in the morning sky!! The photographs are not worth sharing, but it was so remarkable I called Bruce from his place in front of the morning newspaper.

Cris has been moved to a rehab center, the only one in Orlando that will accept positive Covid patients, where they will do all that they can to bring him back to health. One piece of good news is when he eventually tests negative, Judy should be able to finally see him up close! Let's hope it is sooner rather than later. Maureen is still in good shape for which we are thankful. All of the immediate family, as in my siblings, their spouses and grandchildren, remain clear of the virus. The same goes for our boys and their spouses. All remain working from home, for how much longer is anyone's guess.

Today I have no new vocabulary words to share, instead I'm thinking about an old word that is a good one and describes not just myself, but more people than are probably happy to use the moniker....homebody. While it suits me just fine, not everyone is loving it. And to think I subtitled this blog...Out & About with Gail?