Your cart
I'll tell you what day it is....your lucky day. Why so, you ask? At Marshalls one day I came across a lemon squeezer from OXO that looked interesting. Over the years I've purchased many a squeezer that seemed promising, but ultimately fell short of my expectations. While this one is not perfect, it's the very best I've tried. Unless you have a huge lemon, it is perfect. 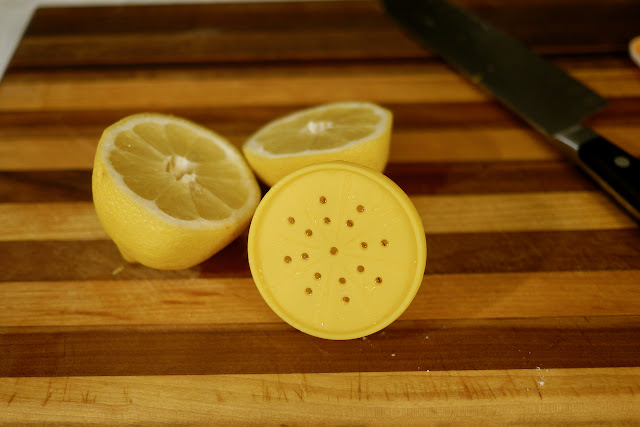 Because it is so flexible, it is infinitely easier to get a lot of juice, minus those pesky seeds. Should you, like me, come across one, I'd say go for it!

Seriously though, "what is today" has been a constant refrain around here. The days slide by, and before you know it, Saturday arrives and it is time to change the sheets again. Are you experiencing the same situation, or is it just us because we are retired?

Many mornings Bruce and I practice pickleball together for as long as the heat and humidity will allow. I have never sweat so much in my life! Another morning I rode my bicycle out of the complex, something I rarely do because of the busy street we are on. As I was coming back, riding on Mills Ave. near Boone, I noticed a bird on a wire overhead. Surprise, surprise. This morning I took a look at the photograph and much to my delight, it appears to be a Starling, although I could very well be wrong. Anyway, what looked like just a dark bird turned out to be one full of jewel tones. 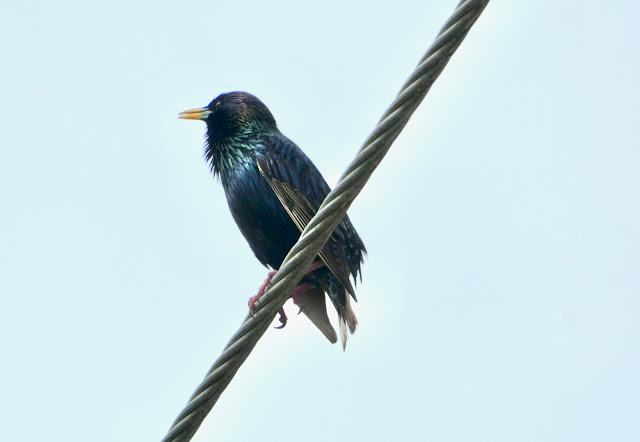 I so wish I were closer to better appreciate the beauty of those feathers!

On Monday, the downtown library was open for business, or so I thought. You might recall that we checked out books on the day before the library closed, March 17, to be exact. For all this time we've held onto those books and I was very excited to turn them in for others. We parked along Rosalind, walking the two blocks or so to the library. Sadly, along the way we saw the new downtown Dolllar General all boarded up, prepared in case of looting. 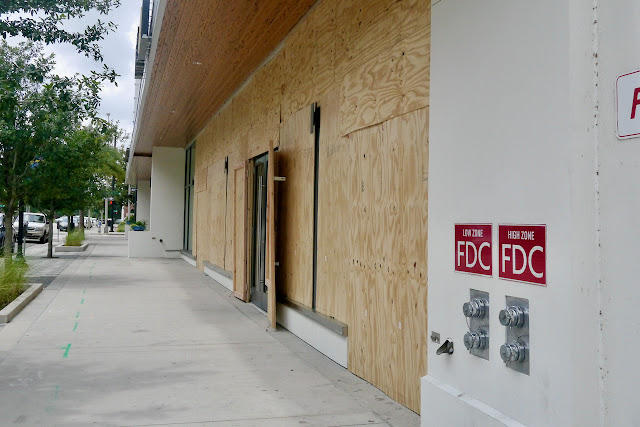 Arriving we realized that Bruce had forgotten his required mask, so I turned the books in and waited for his return. The lobby looks like this. 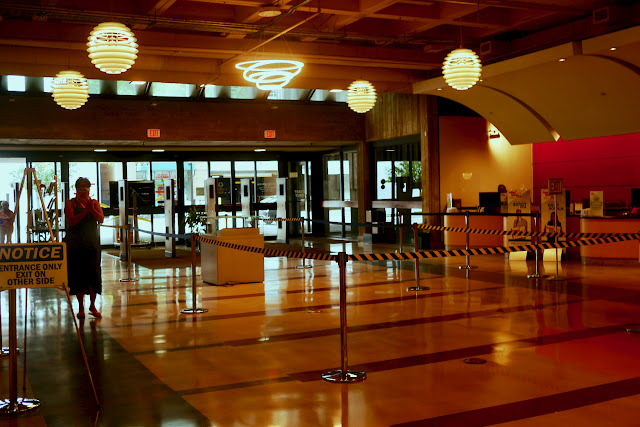 My waiting was for naught. We discovered that you can not actually go to the books shelves yourself, instead the two posted librarians would get them for you which would be fine and dandy if you know what you want. Because my method of finding novels is through browsing, we went home empty handed.

Last Saturday afternoon, with favorable weather we anxiously awaited the SpaceX launch, hoping to see it from the lakeshore which other residents claimed had been successful in the past. Multiple folks were ringing the lakeside hoping for the same, but with cloud cover that looked like this, it was not possible to see it at all, much to our disappointment. 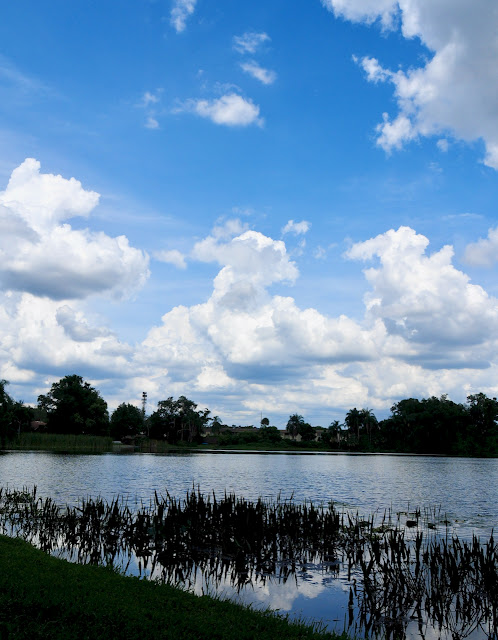 The lake has been filling fast because we've had nearly five inches of rain in the last week or so. The Wood Ducks are beginning to show their adult colors. 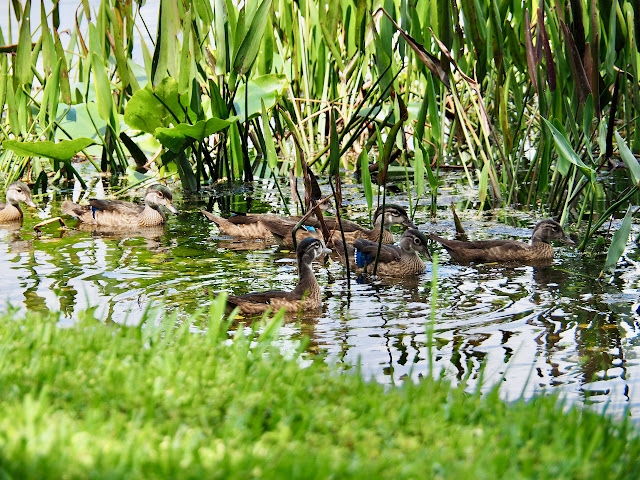 Still on the lake topic, it does my heart good to see young people using the lake, reminding me of our youth when lakes were how most folks in Orlando kept cool during the steamy summer months. 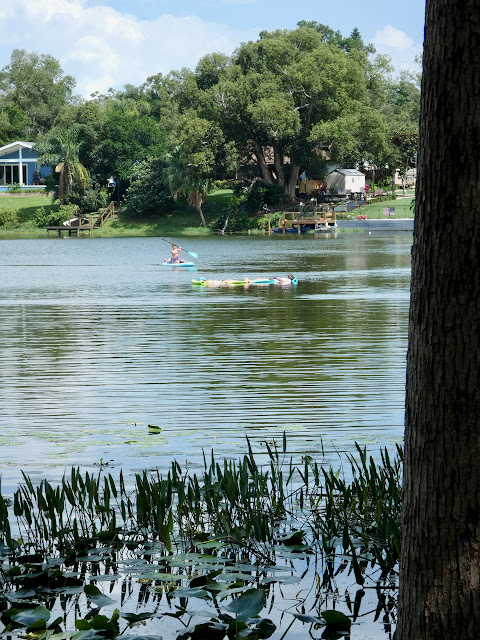 Although we grew up with a swimming pool in our backyard, we were an anomaly, rather than the norm of today. That did not stop us from swimming in the nearby lakes, including Lake Arnold that our son Bill's house now faces. Very much simpler times in Orlando.

It turns out jigsaw puzzles are an excellent way to spend rainy afternoons, something I'm only now learning at my advanced age. Sue gave me the excellent tip about using a magnifying glass on the one I was working on, helping somewhat. What also helped was dragging Bruce into it because with his patience I was certain we could get it done. Except we did not. The trees just would not go together, probably because other green pieces were wrong, but I decided to throw in the towel. It's supposed to be fun right? 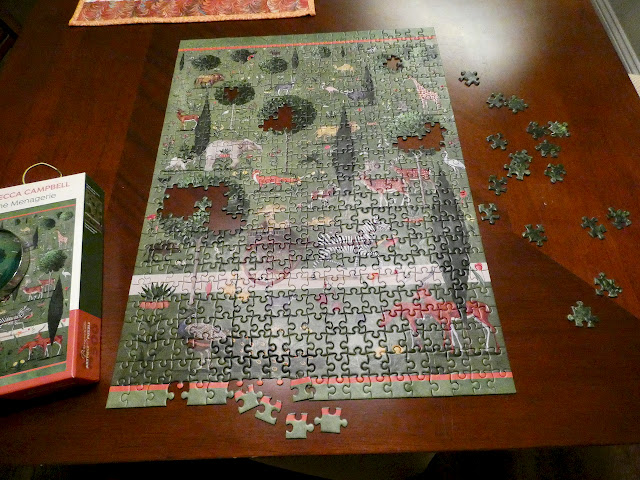 Susan and I traded puzzles, and the one I got in return, well, this one was super fun! No magnifying glass required. 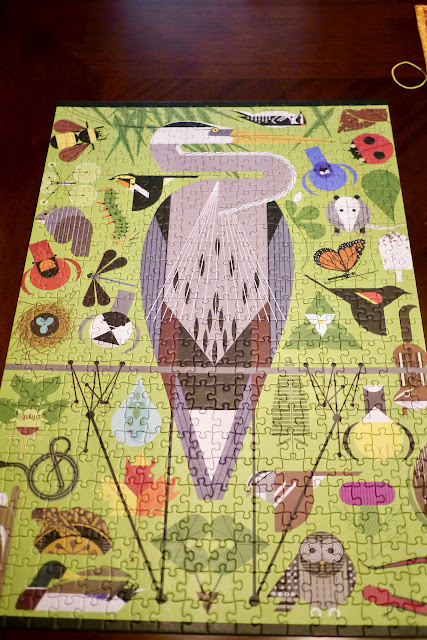 Too funny that the photo includes one of my ponytail holders which are a constant these days as my hair is far too long, making me way too hot. I've got an appointment set for next week with a new stylist Michelle recommended, so we'll see what happens.

Yesterday morning I called Costco just after 8:00 in the morning to see if they had toilet paper and the answer was yes. We were lucky enough to get some, even though we arrived about a half an hour into senior hour. It was shocking to see this line forming in front of the store as we were leaving. 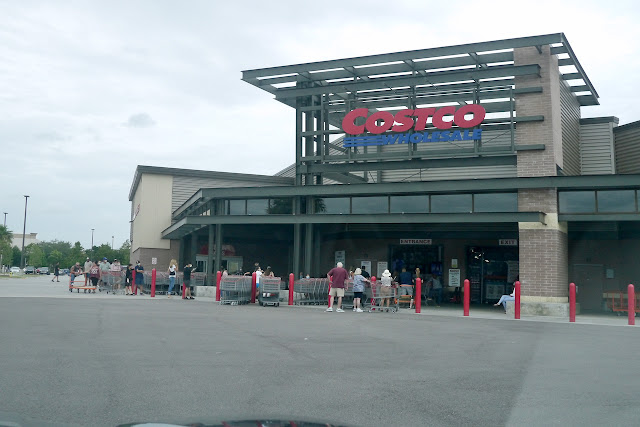 It was even more shocking to see the boarded up Ulta and Nordstrom Rack at Millenia that were looted over the weekend. 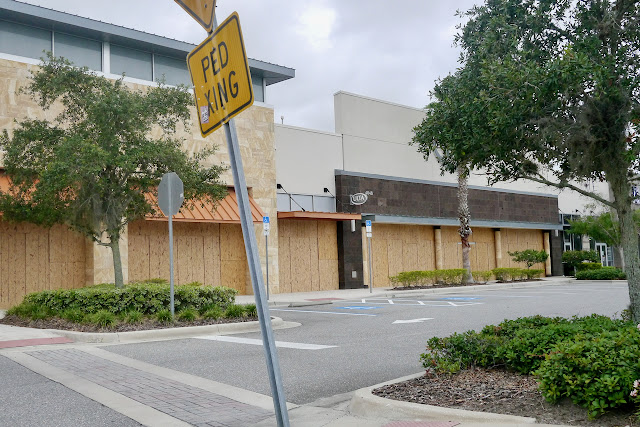 While I don't pretend to have all of the answers, in my opinion, looting is not one of them. With so many unemployed, food shortages, a deadly virus, instances of police brutality, and now riots. It's all beginning to feel overwhelming, isn't it?

In an effort to do something normal from my past, I've decided to enter the Historical Society calendar contest again, going out on Sunday afternoon to see what I could see. In the past it has been focused on specific historic neighborhoods, but in an effort to maintain social distancing, the parameters have been expanded. I did not go far, beginning in nearby Lancaster Park. 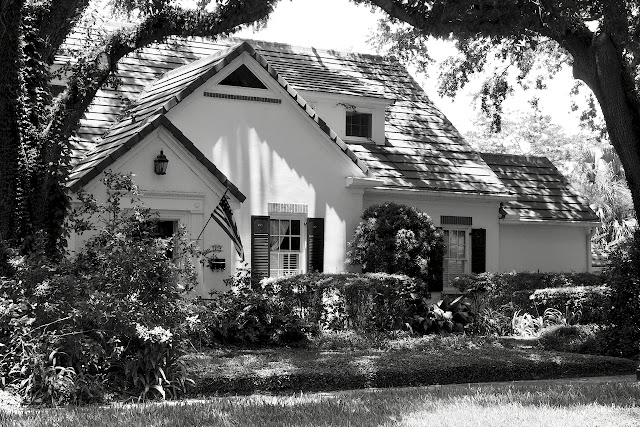 I won't be entering the above, but it gives you an idea of what they are after. Black and white, something I rarely do. From there I went over to Lake Cherokee where I found this on the sidewalk, accomplished with a power washer. 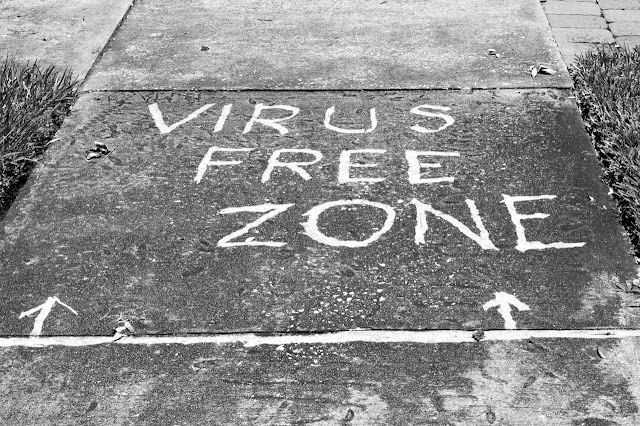 Most definitely a sign of the times. Nearby I took a few photographs of the Ultimate I-4 project and the new exit ramp onto Delaney from the SR 408. 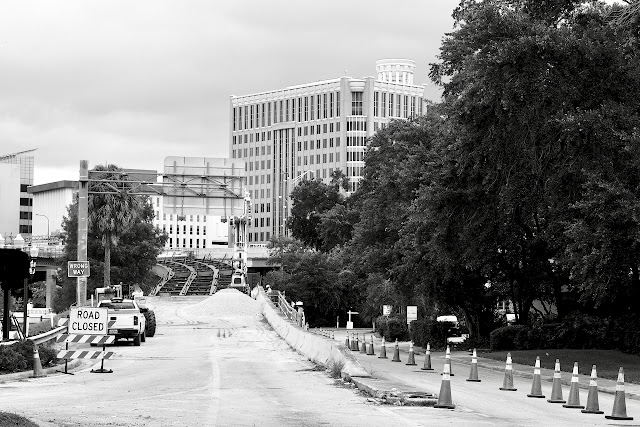 It has been nearly two years now since we returned from Vancouver and not once have I used I-4, as it is far too dangerous for the likes of me. 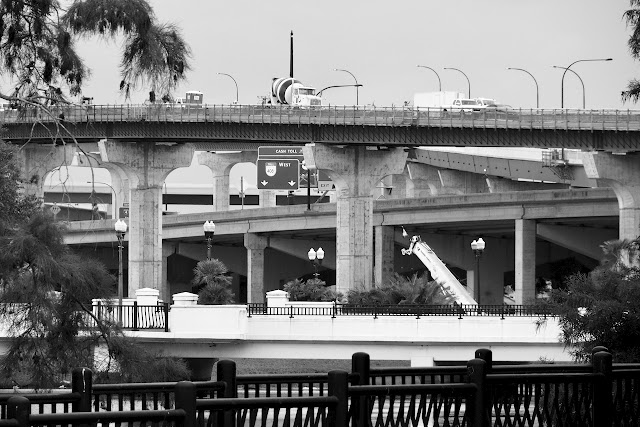 I needn't tell you that these are some perilous days we are living through. I can only hope that when I look back on these days through the words and photographs of this blog that some progress to our current health and political problems will have been addressed successfully. At the moment, it feels as if those solutions are a long way away. In the meantime, we just keep putting one foot in front of another. 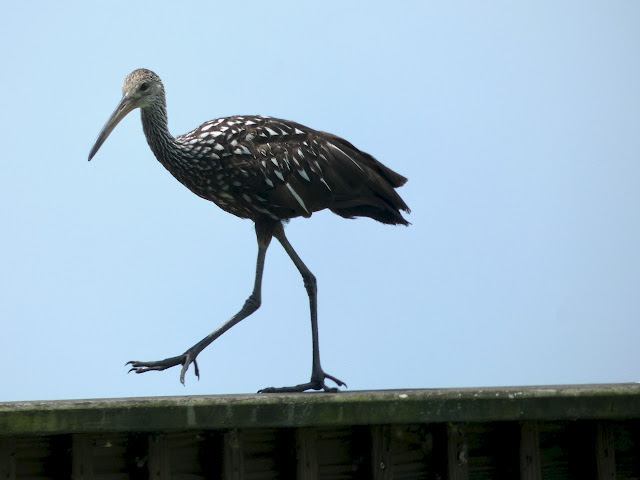