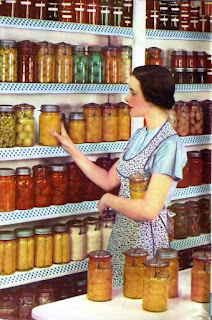 I was watching a cooking vlog the other day that centered around pantry staples.  It was  about how to build a pantry on a budget.  I couldn't help but think about my own pantry.   I've been working to bring it up to a certain level but I can say honestly that I've not done it without making some mistakes.  I thought I'd share some of those with you.

First let's look at the word 'pantry'.  It is derived from the French word 'pain' which was their variation of the Latin 'panis' which is simply 'bread'.   A pantry was the room in which the bread was stored.  Over time, a pantry came to be a room in which foods were stored and prepared and in Britain the one responsible for this office in a large household was called the "Pantler".  The current definition of the word has come to mean a place where a variety of items might be stored, from food to dishes, small appliances, linens, silverware, glassware and most surprisingly to me, cleaners.

In middle class homes there came to be a room between kitchen and dining room where the Butler handled dishware and silver.   If you recall, in the series Downton Abby, we saw that the Butler's rooms were located downstairs in several rooms.   I've been in some turn of the century homes that were quite modest but they had a Butler's pantry and honestly I am envious...but I digress...We are discussing FOOD pantries.

So essentially a pantry is a storage area for food.

When I speak of my pantry I am referring to the space where I store the bulk of my canned and dry goods as well as some paper products.  Everything in my pantry is a shelf stable item.  I've spoken a great deal of my pantry and the sorts of things I store in it.   I've also mentioned that it is my intent to store a year's worth of food if at all possible.  I am not interested in expanding to longer term storage (10, 20 nor 30 years) at this time.  I feel if I have a solid year's supply of good nourishing foods on hand, even though we might miss eating fresh produce or having fresh milk, we will have a reasonable supply for any emergency that might arise.

That's my definition of a pantry.   I do have a  deep freeze but I'm well aware that if there were a true emergency, and we lost power for an extended length of time, what's in my freezer might well be lost.  But barring physical disasters (tornado, fire, water damage) my pantry should stand.

A pantry is meant to be a rotation of goods.   It's not like savings where you sock away money for a future event that might occur.  It's food.  It's meant to be used.  It's only going to last so long.  Even items stored for long term storage are meant to be used and rotated routinely.    I've been guilty in the past of 'saving' the food and then as I'm looking over the shelves finding expired items that are no longer at their prime.   I used to toss those...But I've learned that I can discover their real shelf life by looking online.  Just because a manufacturer slaps a date on a box doesn't mean it's no good.  No indeed.  A best by date is a suggestion for when an item will be at prime for taste.  Over time some products will change but are still useable.  It's not uncommon for powdered or canned milks to turn yellow but they are still good! There are also tests we can make: does it look good?  Does it smell good?  Are there any visible molds?  Is a can rusty or bulging?  Do you see visible leakage?   If there's any question I would rather toss it.  But nine times out of ten?  The food is still good.   Again, there are guidelines online.

I used to be shocked when I'd go to my shelf and discover I was out of some item.  I've learned that when I use one item, I buy two next time I go to the store. It's surprising how quickly you can build a supply of items with this method.

And there's another mistake I've made: thinking the only way to stock my pantry is to buy great quantities all at once.  It's not necessary to do that at all.  It's admittedly lovely to go in and buy cases of food if you can but you can also build a pantry by buying one for now and one for later and building it a little at a time.

One mistake I've made in the past, which I'm now trying to rectify is knowing what basic food items I use repeatedly in multiples of recipes and in what quantities I need to stock them to have a 12 month supply.   Flour, Sugar, Oatmeal, Cornmeal, yeast, baking powder and soda, salt, green beans (I actually prefer canned), tomatoes and sauce are a few that I'm well aware I repeatedly reach for but there are many other items as well that I haven't stocked appropriately and I'm now paying close attention to those items and trying hard to determine how much of all of them I might use in a year's time.

I haven't considered in the past  that we might also purchase  "convenience" items.  What convenience items am I thinking of?  Gelatin. Pudding mix.  Dry powdered drink mixes.  Instant potatoes.  Prepared canned foods like Ravioli or Tamales.   Canned soups.

We'll want snacks, too.  Some of the snack items generally have a more rapid turn around rate for expiration dates and that is something that has to be kept in mind.  Chips, grahams, marshmallows, pretzels might have shorter term storage but would be awfully nice to have.   Popcorn and jarred nuts however, might well be kept in a year's supply.  Dried potatoes or dried mushrooms might well be considered convenience items but not have a fast expire date.

Another mistake I've made: I've never considered what recipes I might make with just pantry supplies. An example is Alpine chicken casserole.   This dish requires canned soup, canned chicken, boxed stuffing mix.  I generally serve it with mashed potatoes and cranberry sauce and perhaps a fresh salad item, but I might also serve it with a green canned vegetable.  We typically eat this about once every three months.   So ideally, I'd have four of each item required for making that menu.  We make pizza once a week.   If using long term storage I'd want to have at least enough flour, yeast, salt,  oil, tomato sauce and dry Parmesan cheese to last a year.  If we happen to have olives and peppers and canned mushrooms and dry pepperoni that's all bonus.  But just those first six items would insure we have some form of something we consider a normal menu item.    I'm planning to create a list to keep in my recipe file of meals that can be made solely with pantry items, listing not just recipes but complete menus.

I've often bought a quantity of items I thought would be good because they came highly recommended by others but discovered we didn't much like them.  There's nothing worse than realizing that you absolutely do NOT like a food item of which there is a plentiful supply.   If it's unfamiliar to us, I'm trying to buy one and try it first.  I then look to see how many recipes I might find that call for that ingredient.   Would I routinely make any of those?  If I find that it tastes good, and it has versatility, then  I'll start to stock up on it.

I've never really considered dehydrated foods...and I'm looking to fix that in the future.  I know that we could buy dehydrated onion, bell peppers, dried tomatoes, mushrooms,  potatoes and many other items.  I want to source a few dehydrated items in smaller quantities and try them.   I have discovered that dried tomatoes have a rich flavor. I've used the dried ones from Aldi and found them really good.   Rehydrated dried onions tend to be stronger in flavor than fresh ones.  I am learning to use a lesser quantity than I think I need.  I'm ready to experiment with a few more dehydrated items.

And finally, I'll share one last mistake I've made.  I don't have a garden and I don't have a pressure canner so I mistakenly thought I couldn't build my pantry with home canned items...Oh that is so not true!  Small batch canning is entirely possible and those small batches can build a very nice little pantry supply.  I learned that this year when I put up a single jar of pickle relish.  It lasted us a couple of months once opened.  I put up jelly from odd bits from the freezer and now we've a dozen jars...that's just two small batches!  For us, that's a year's supply of jams and jelly.   So don't discount the small amounts you might can.

These are just a few of the mistakes I've made in my pantry keeping but it's not deterred me in the least.  I'm going to keep my pantry growing!