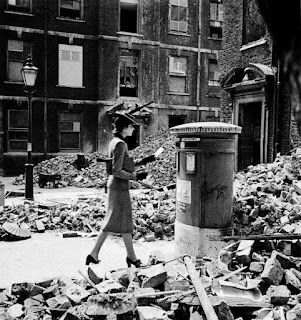 RHYS BOWEN: My husband John reminded me the other day that he had lived through the war as a child. Everyone had faced nightly bombing raids, rushing to a shelter, grabbing the most precious items, just in case. "And we just got on with it," he said. "Nobody panicked. We got on with our lives."

Of course he was a boy. He probably never noticed the anxiety on his mother's face as she strove to remain calm for her children. He thought it was a great lark to play on forbidden bomb sites. But I have to say that everything I've heard indicates that the Brits were remarkably calm and stoic throughout the whole ordeal.  They didn't know when it would end or if it would end well. During the early years they fully expected Hitler to invade and had stockpiled pitchforks and garden tools to defend agains a mighty German army.

I have written several times about World War 2 but this experience has made it so personal for me. Now I can identify a little with what the people went through. We don't know how long this will go on or if it will end badly for some of us. It's an invisible enemy and there really isn't much we can do to protect ourselves other than staying home. There are those, as there were in WW2, who are openly defiant: this can't happen to me. Remember the scene in my book IN FARLEIGH FIELD  when party goers dance on the rooftop as bombs fall nearby. Maybe defiance was good then, but it isn't now. Those young people who think they are safe are not. What's more it's as if they were carrying bombs into the houses of loved ones. 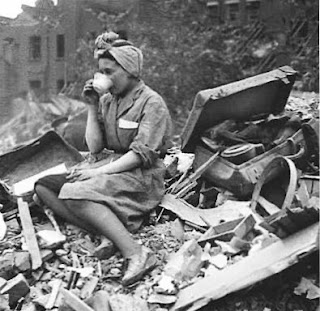 And so we soldier on, with good days and bad days, with days when we tell ourselves it's not so bad and days when we ask ourselves how long we can keep going.

So I'm going to remember that I'm British. Eccentric maybe, but
Stiff upper lip, you know. I'll be brave and resilient. And I've made several resolutions:
I will make my bed every morning.
I will dress properly, not stay in pjs all day. I read a book written by a young Brit who was stationed in Kenya a hundred years ago. He was the British officer for a vast territory, the only white man for miles around. And every evening he would put on his dinner jacket and bow tie and have a white tablecloth, silverware all correct and sit alone to eat in his mud hut, even if the food was yams and bush cow, because he knew if he let standards slip it would be the end of him.
I try to remember that. I saw a post by Laura Lippman today that she is putting on a lovely outfit for a few minutes every day. And make-up.  I think I'll try that and take a picture every day. Time to experiment with the strange cosmetics at the back of my drawer. We have time, remember?

And a final word of encouragement: 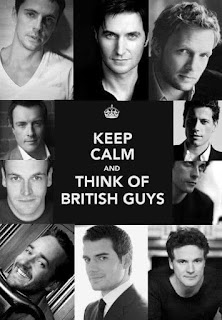