This creamy, homemade bacon mac and cheese recipe is made on the stove in one skillet, with an option to make it baked-style! A fast, easy weeknight meal.

This post was sponsored bySafeway. I was compensated for this post and for developing the recipe. However, all opinions below are completely my own. You can get all the products featured in this recipe at your local Safeway!

You make it on the stovetop. Its done in one pan, including the macaroni, meaning no pre-cooking and draining the pasta! You can eat it right then and there, if you like a super creamy stove-top style mac and cheese. But Ive also added an option to cover it with bread cubes and bake it in a screaming hot oven for 10 minutes to get the convenience of stove top and the crunch of a baked-style mac and cheese. Its the sort of one-stop-shop of creamy bacon mac and cheese and it comes together fast! With minimal effort, this homemade mac and cheese with bacon recipe is absolutely worth it.

I wasnt really thinking about mac and cheese when I went on a tour at Cobram Estates olive farm with Safeway last month. The weather was warm and luxurious, the folks at the event were friendly and inviting, and the olive farm felt like I was walking around the countryside of Tuscany. The walk through their facilities was equally fascinating.

We watched the machine freshly harvest olives, then get transported to the processing plant. There, they were mashed and smashed! Then we sampled freshly squeezed olive oil which was insanely peppery and vibrant. And finally we did a taste test of various different olive oils, including an competitive brand that (spoiler alert) tasted like crayon. Just FYI, if the olive oil tastes oily and like crayon, its gone bad (or, quite possibly, it was never good to begin with)!

Of course, no Safeway tour is complete without food. Cobram Estates teamed up with Boars Head and used their cheese and meat to make some excellent dishes, including a focaccia crostini with turkey breast, an arugula and apple salad with herb chevre, a fall vegetable gratin with ham, a Hawaiian-inspired fried rice, and a grilled delicata squash stuffed with pancetta and sage.

We washed it all down with Dasanis naturally flavored sparkling waters which cut through some of the richness of the food without any cloying sweetness.

The day ended with even more food, this time right near a lake, where we feasted on cheeses and charcuterie from Boars Head as well zero-proof cocktails made with Dasani Sparkling water and juices. As someone who needed to drive home afterwards, I appreciate the chance to drink something non-alcoholic that wasnt just a regular sugary soft drink. And now Im slightly obsessed with Dasanis lime sparkling water!

Once I hit my local Safeway I found out that Boars Head isnt just deli meat. Their charcuterie and cheese selection is extensive! And thats when I realized I need to make mac and cheese. Its the sort of classic dish that works on a holiday dinner table as part of a buffet, or as an easy simple weeknight meal. Being able to make it in one skillet, means its doable for anyone, anytime! Pair it with one of Dasanis sparkling waters to cut the richness and you have the perfect evening in.

What makes this recipe so fast, easy, and speedy?

This recipe uses one skillet and doesnt require you to pre-cook the macaroni in water! Thats right, the macaroni is cooked right in the skillet with milk. No boiling water, no draining the pasta! The starch from the macaroni helps thicken the sauce and keeps the cheese from breaking and getting oily.

How to make Bacon Mac and Cheese

This recipe uses just one pan to make it! I prefer a 12-inch cast iron skillet but you can use any 12-inch or larger skillet or saute pan. If you plan on doing the optional oven baking at the end to give it some crispy edges and bread cube topping, use an oven-proof pan.

First you fry up the bacon in the skillet until its crispy. Then you drain the bacon and move it to the paper lined bowl. Wipe out the skillet but dont clean it. Add some olive oil, saut some chopped onions and minced garlic then add the uncooked macaroni to the pan! Add milk and cook the pasta in the pan with the onions and garlic.

Once the pasta has cooked and absorbed the liquid, add the cheese, the bacon and some parsley and even more milk that has a little cornstarch and mustard dissolved in it. Heat until the sauce has thickened and youre done!

BUT, if you want, you can top the mac and cheese with olive oil tossed bread cubes and parsley. Toast in a hot oven (500F or whatever the hottest your oven will go to) for 10 minutes and youve got a baked mac and cheese with bacon, complete with crunchy topping and crispy edges.

Do I have to use olive oil? Cant I just use the bacon grease?

I tested this recipe with olive oil and with bacon grease. And as much as I love bacon, the bacon grease is actually is TOO rich and heavy for this mac and cheese. I could only really eat one or two bites. Thats why I opted to drain it out and use olive oil.

Can I use different cheese instead of Cheddar and Monterey Jack?

That said, if you do want to experiment with different cheese in this dish, go for it! Id pick a more robust flavored cheese to substitute for the Cheddar and one that melts well and is creamy for the Monterey Jack. Here are a few suggestions.

For the Cheddar cheese try substituting and equal amount of:

For the Monterey Jack try substituting and equal amount of:

Can I substitute or leave out the bacon?

Sure! You can totally leave out the bacon and make this mac and cheese vegetarian. Just skip frying up the bacon in the beginning and use a little more olive oil (Id increase it to 2 tablespoons) to cook the onions and garlic.

Other ingredients you can add to make it vegetarian including adding:

You can also substitute out the bacon for another meat if youd like. Heres a few suggestions:

Can I use pre-cooked bacon?

Absolutely! Just crumble or chop the bacon and fold it in at the end.

Can I use pre-shredded cheese?

I dont recommend buying pre-shredded cheese for mac and cheese. Pre-shredded packaged cheese is often coated with a powder that prevents clumping. This powder ALSO prevents the cheese from melting properly and youll get a lumpy sauce. Instead take the extra 2 minutes to shred the cheese. It will taste better, and it will melt better as well!

How long can you store mac and cheese leftovers?

How do you reheat mac and cheese?

You can also reheat the mac and cheese in a 350F oven, covered with aluminum foil for 45 minutes. Then remove the cover and bake an additional 10-15 until it is hot all the way through and the bread cubes crisp up on top.

If you like this bacon mac and cheese recipe, check out some of these other recipes that feature cheese!

And check out some of these recipes featuring bacon in them! 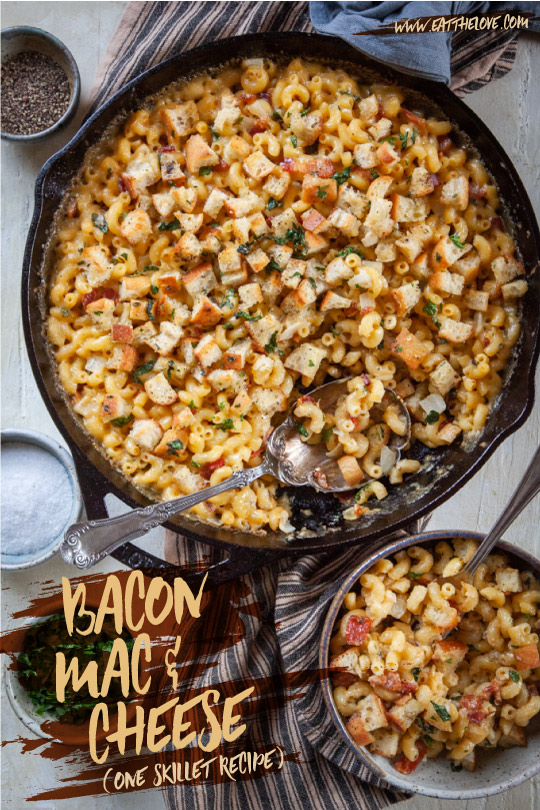 This easy homemade bacon mac and cheese recipe is made in one skillet, and the macaroni is cooked directly in the pan with milk, skipping the step of cooking and draining the pasta! Two types of cheeses work in tandem to create a classic flavor of mac and cheese from scratch with minimal effort. An option to top the dish with bread cubes and a quick pop in the oven transforms the dish from a creamy stove-top style mac and cheese to a baked-style mac and cheese in minutes!
Prep Time 10 minutes
Cook Time 25 minutes
Optional Bake Time 10 minutes
Servings 6
Calories 942kcal
Author Irvin

Mac and cheese base

**Disclaimer My article often contains affiliate links. All products are ones I love. If you choose to buy one of these items through the URL , I will receive a small commission at no extra cost to you. All proceeds help support the blog.