It’s a beautiful thing when peonies bloom. The following ode to peonies was first published in Yankee Magazine in 1991. 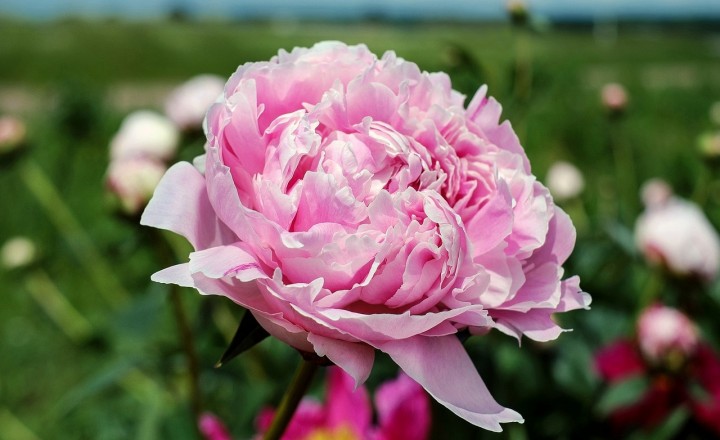 It is the month of peonies – the week, the day, and the hour of peonies. In late March their red asparagus-like shoots begin to push towards the intensely blue spring sky with its scudding clouds. Through April and May the stalks gained height and turned green; buds formed and swelled tantalizingly. Ants crawled over the veined globes with gathering excitement, and now, at last, comes the hot day after warm rain when the flowers open. And we are blessed, we are undone by them.

Five years ago we made a big change in the yard here. We dug up the hosta lilies that grew along the porch, which had been planted when three or four large elms grew in the yard, shading the front garden. In the years since Dutch elm disease destroyed the trees, the hosta had been getting too much sun, burning up every summer.

So we moved the hosta to a raised bed under the maples (where the hummingbirds continue to patronize them), and that fall I planted seven peonies in their place – Festiva Maxima – from my favorite mail order nursery in Connecticut. I dig labor-intensive holes for them, taking out the subsoil and replacing it with compost and peat. I added prodigious amounts of bonemeal and mixed it up with the compost. I did everything right for these flowers, mulching them after the ground was frozen, fertilizing them in the spring when the shoots had grown a couple of inches, even drenching them with Captan, against fusarium wilt and against my principles. The first year they made a modest but respectable beginning, with three or four blossoms to a plant, and every year they have gained in stature.

This year the plants exceeded every expectation. Suddenly they’ve come into their full adult beauty, not strapping, but statuesque – the beauty of women, as Chekhov says, “with plump shoulders” and with long hair held precariously in place by a few stout pins. They are white, voluminous, and here and there display flecks of raspberry red on the edges of their fleshy, heavily scented petals. 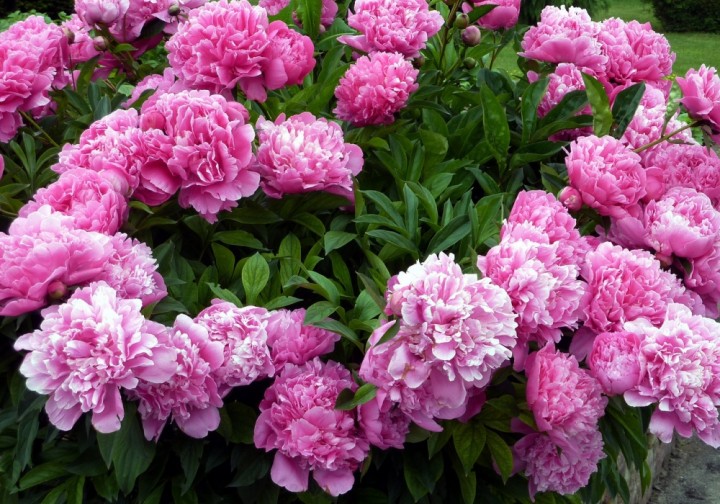 Peonies | The Official Flower of Summer

These are not Protestant-work-ethic flowers. They loll about in gorgeousness; they live for art; they believe in excess. They are not quite decent, to tell the truth. Neighbors and strangers slow their cars to gawk. Yesterday violent thunderstorms battered Hillsborough county, to the south, and I heard on the car radio that three-quarter-inch hailstones were falling there. All I could think about was getting home to my peonies. I floored it and imagined myself saying to the man in the broad-rimmed tan felt hat, “But officer, this is an emergency!” We in Merrimack county had no hail, as it turned out, but rain bent the heavy-headed flowers over the wire supports and shattered many blossoms.

This morning petals whiten the ground as if snow had fallen in the night or as if a swan had molted in the garden. The smaller, ancillary buds have yet to bloom, but the great display is over. Some gardeners pinch out these small side buds so that the plant’s energy will go into a few huge blooms, but I never have the heart. At least my little ones are left – my debutantes.

I suppose if I had to declare a favorite flower, it would be peonies, and here I find myself in the moment just after their great, abandoned splurge. They seem like the diva in her dressing gown after the opera – still glistening, but spent. “Death is the mother of beauty,” the poet Wallace Stevens tells us. Maybe never again will all the elements conspire to make another such marvelous moment of flowers. I’m glad I wasn’t away from home or, as the Buddhists say, asleep.

Do you look forward each year to the moment when peonies bloom?

Excerpt from “The Moment of Peonies,” Yankee Magazine, June 1991.

The post The Moment When Peonies Bloom appeared first on New England Today.

**Disclaimer – This article contains affiliate links. All products are ones I like. If you choose to purchase one of these products through the URL provided, I will receive a small commission at no extra cost to you.