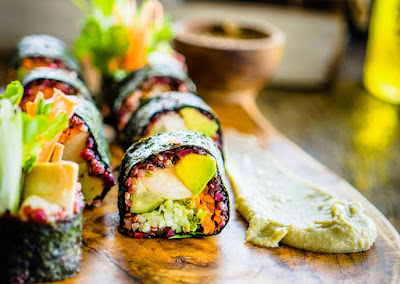 Sushi comes from the word sushimeshi, meaning “sour rice,” a nod to the

vinegar-seasoned rice used in sushi-making. Sushi is a traditional Japanese dish featuring rolled seaweed sheets, specially prepared rice, and usually some type of seafood, nuts, and/or vegetables. Its ingredients are typically raw, cooked, or pickled. And there are different types of sushi differentiated by their structure and composition.

The types of sushi include:

Makizushi is the best-known type of sushi, which consists of a single sheet of seaweed rolled around rice and fillings and cut into 6-8 pieces. The word “maki” means “to roll.” Makizushi comes in two basic sizes: larger circumference rolls with more fillings are known as futomaki, and slimmer rolls consisting of a single filling are called hosomaki. Each piece is meant to be dipped in soy sauce and eaten in a single bite (thus avoiding double dipping).

Another word for makizushi is norimaki; nori is the name of the seaweed sheet that’s lightly toasted, filled with rice and filling, and rolled.

Uramaki is inside-out makizushi. Same form, same ingredients, but with the seaweed hidden inside the roll, and a decoration of sesame seed, fish eggs, or other toppings typically clinging to the outer rice layer. Uramaki is an American invention, from the days when sushi was unfamiliar and seaweed altogether unheard of. The most well-known version of uramaki is the California roll, with cucumber, avocado, and crabmeat inside the nori, and rice outside.

Nigiri is an oval-shaped mound of rice, topped with a slice of something. Sushi makers mold the rice mound and press the topping on the mound by hand, which explains the name nigiri, which means “gripped or pressed (by hand).” Traditionally, the sliced ingredient on top is a fatty fish like tuna, salmon, or shrimp.

Temaki, also known as a hand roll, consists of a nori sheet wrapped around fillings in a cone shape. These are typically larger and more filling than the other rolls — one or two of these can make a complete meal.

The Evolution of Sushi

What Americans think of as sushi is quite different from traditional Japanese sushi, which itself isn’t that old. Whereas sushi in Japan is often eaten at special occasions, many Americans consume their favorite finger food multiple times per week. In fact, sushi is now more popular in the US than in its country of origin.

Sushi originated in southeast Asia as a way of preserving fish. Fishermen (and women) would press their fresh fish between piles of salted rice, pile on a heavy stone, and leave it to ferment. Initially, this process took several months. Once complete, the rice was tossed as waste. And since it was so labor intensive, only the wealthy could enjoy this delicacy.

Over time, people figured out that adding vinegar to the rice could speed up the rate of fermentation from months to week or even days. At these speeds, the rice itself stayed tasty and safe enough to consume and fish and vegetables became popular toppings and fillings because they were readily available.

The evolution of sushi continued in the port city of Edo, Japan (now Tokyo), where fishmongers found that putting the fish next to hot cooked rice could reduce prep time to just a couple of hours. But modern sushi as we know it really came about in the 1820s when entrepreneur Hanaya Yohei opened a sushimeshi stall on the banks of the Sumida River. With access to fish so fresh, Yohei dispensed with cooking and fermenting, and simply sliced raw fish over cooked and seasoned rice in the nigiri sushi style. In a sense, sushi became an accessible, fast food thanks to Yohei (albeit healthier than the modern version).

The Problem with Eating Fish

When it comes to fish consumption, speaking purely from a health perspective, there are some significant positives. Studies tell us that people who eat fish tend to live longer and enjoy healthier lives, with lower risk for chronic diseases that impact much of the Western world. But fish also has some serious drawbacks. (For a whole article on the pros and cons of eating fish, click here.)

The problem is, we aren’t actually fishing our oceans — we’re overfishing them. Thanks to nets that are up to two miles long and have openings the width of a football field, fishing trawlers catch marine life like whales, dolphins, sharks, and sea turtles. In fact, up to 40% of all catch is what’s termed “bycatch” — marine animals that will not get sold, and may end up dead or disfigured due to these extremely inefficient and cruel methods of industrial fishing.

So maybe we can avoid the problems associated with fishing by raising fish in farms, rather than catching them in the wild? Nope. Farm-raised fish — which now comprise half of the world’s fish harvest — are, if anything, actually worse than wild-caught fish on most counts. They generate massive amounts of pollution, and large amounts of antibiotics are required to keep fish alive under toxic conditions. Other chemicals, including pesticides and anticorrosives, are liberally used and leach into the environment. Not to mention that the fish raised in captivity aren’t as healthy as wild-caught, with less protein and a less favorable omega-6 to omega-3 ratio.

On the topic of health, wild-caught species are often nearly as polluted as their farm-raised counterparts. We’ve been treating our oceans, rivers, and lakes like garbage dumps, resulting in the fish we love eating becoming riddled with toxins such as mercury, PCBs, and even pharmaceutical drugs.

To add potential injury to injury, fish used for sushi is typically raw, which also means a heightened risk for bacterial and parasitic infections.

From an ethical perspective, eating fish also means taking another creature’s life. And studies tell us that fish do feel pain, as evidenced by their ability to produce endogenous opioids (natural painkillers). Many people prefer not to cause pain to other sentient beings if they don’t need to.

And finally, not everyone loves the taste of fish, especially when it’s raw.

The good news is, you can still enjoy sushi if you don’t eat or like the taste of fish (for whatever reason). The trick is to view sushi as primarily a rice, veggie, and seaweed dish, rather than a delivery system for raw fish.

Rice seasoned with salt and vinegar is a pretty good base for a vegan meal. However, to make vegan sushi, the trick is to replace the fish with fish-free fillings and toppings. You can make sushi out of almost any food you can think of. But these are some of the typical vegan sushi offerings that you can find at restaurants or make at home.

One favorite, cooked vegan sushi filling is mushrooms, which can sort of mimic the texture and mouthfeel of certain kinds of sushi fish. In addition to the common white button mushroom, you can also use shiitake, portabella, baby bella, or just about any other kind of edible mushroom.

Cooked veggies that go well in sushi include eggplant, carrot, and sweet potato. You can steam or microwave these vegetables, or even cut them into strips, marinate them, and bake or air fry them to mimic the taste and crunch of bacon.

Baked tofu also adds a chewiness to vegan sushi and can absorb whatever flavor you soak or cook it in. And lately, the inventive vegan blogosphere has been abuzz about techniques for turning beets and even tomatoes into very convincing mock raw fish. Done well, it even looks like raw tuna!

To make raw vegan sushi, we can start with the plant-based ingredients from traditional sushi making. Avocado and cucumber pair well together in sushi. Avocado is the classic substitution for fatty fish, and the cucumber adds moisture and crunch. You can cut and slice either veggie in many ways to accommodate the form and visual appeal of whatever kind of sushi you’re making.

Carrots, sliced thin or julienned, also add color, flavor, and texture to your rolls. And raw cashews or macadamia nuts, laid in a tight row over the rice before rolling, can add a fatty crunch to every bite.

You can also sprinkle raw sesame seeds on the rice for visual and flavor appeal. Black sesame seeds, available in specialty shops and online, make a nice black and white contrast that shows up especially well if you make uramaki sushi (the inside-out variety).

You can also pickle or ferment many types of vegetables for vegan sushi. Some of the classics include radish, summer squash, and asparagus, but you can go to town here, and consider pickling carrots, cabbage, beets, or whatever’s in your garden or fridge. A word of caution here: some Asian grocery stores sell commercially-produced pickled squash and radish, which may include preservatives and artificial coloring. Check the label before purchasing, or do the fermenting yourself.

You can also ramp up the flavor of your sushi with the fermented soybean dish known as natto (which is one of the best sources of the essential vitamin K2), or use the tangy, slightly sweet, and very salty, umeboshi plum paste.

How to Make Vegan or Vegetarian Sushi

If you’ve seen the documentary Jiro Dreams of Sushi, about a master sushi maker who approaches each cut and roll with the attention of a surgeon performing a heart transplant, you might be intimidated about your own ability to make sushi. Certainly, becoming a master sushi chef takes decades of practice. But just as you don’t have to win the Indy 500 in order to drive to work, you can start enjoying vegetarian or vegan sushi right away at home. Sure, your initial rolls might look a little rough around the edges. But the good news is, they’ll probably taste awesome from Day 1.

Here’s how to get started.

**Disclaimer – This article contains affiliate links. All products are ones I use. If you choose to purchase one of these items through the link , I will receive a small commission at no extra cost to you. All proceeds help support the blog.